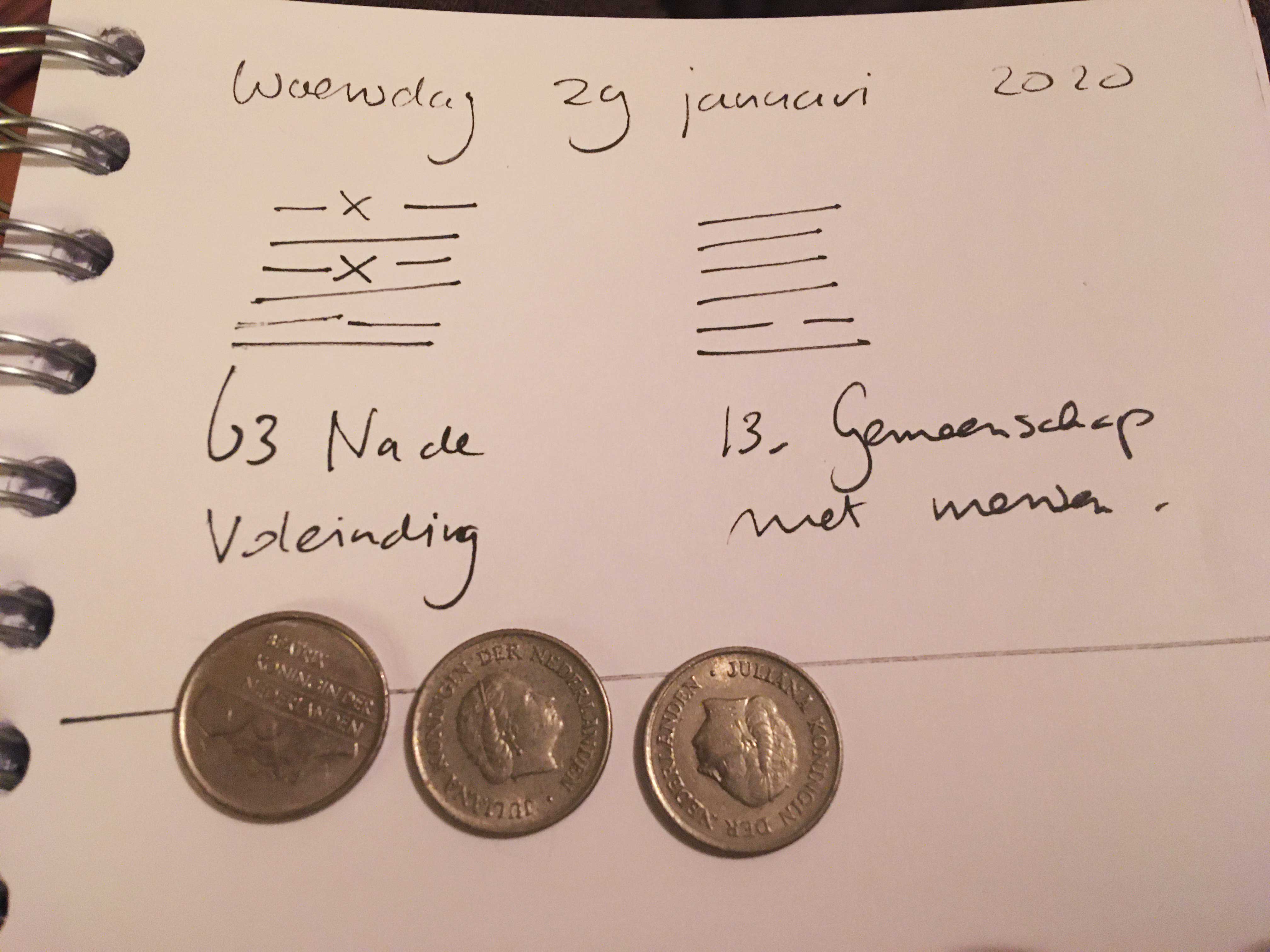 This hexagram is the evolution of T’ai PEACE (11). The transition from confusion to order is completed, and everything is in its proper place even in particulars. The strong lines are in the strong places, the weak lines in the weak places. This is a very favorable outlook, yet it gives reason for thought. For it is just whenperfect equilibrium has been reached that any movement may cause order to revert to disorder. The one strong line that has moved to the top, thus effecting complete order in details, is followed by the other lines. Each moving according to its nature, and thus suddenly there arises again the hexagram P’i, STANDSTILL (12).
Hence the present hexagram indicates the conditions of a time of climax, which necessitate the utmost caution.

The transition from the old to the new time is already accomplished. In principle, everything stands systematized, and it si only in regard to details that success is still to be achieved. In respect to this, however, we must be careful to maintain the right attitude. Everything proceeds as if of its own accord, and this can all too easily tempt us to relax and let thing take their course without troubling over details. Such indifference is the root of all evil. Symptoms of decay are bound to be the result. Here we have the rule indicating the usual course of history. But this rule is not an inescapable law. He who understands it is in position to avoid its effects by dint of unremitting perseverance and caution.

Six at the top means:
He gets his head in the water. Danger.

Here in conclusion another warning is added. After crossing a stream, a man’s head can get into the water only if he is so imprudent as to turn back. As long as he goes forward and does not look back, he escapes this danger. But there is a fascination in standing still and looking back on a peril overcome. However, such vain self-admiration brings misfortune. It leads only to danger, and unless one finally resolves to go forward without pausing, one falls a victim to this danger.

above CH’IEN THE CREATIVE, HEAVEN
below LI THE CLINGING, FLAME

The image of the upper trigram Ch’ien is heaven, and that of the lower, Li, is flame. It is the nature of fire to flame up to the heaven. This gives the idea of fellowship. IT is the second line that, by virtue of its central character, unites the five strong lines around it. This hexagram forms a complement to Shih, THE ARMY (7). In the latter, danger is within and obedience without–the character of a warlike army, which, in order to hold together, needs one strong man among the many who are weak. Here, clarity is within and strength without–the character of a peaceful union of men, which, in order to hold together, needs one yielding nature among many firm persons.

FELLOWSHIP WITH MEN in the open.
Success.
It furthers one to cross the great water.
The perseverance of the superior man furthers.

True fellowship among men must be based upon a concern that is universal. It is not the private interests of the individual that create lasting fellowship among men, but rather the goals of humanity. That is why it is said that fellowship with men in the open succeeds. If unity of this kind prevails, even difficult and dangerous tasks, such as crossing the great water, can be accomplished. But in order to bring about this sort of fellowship, a persevering and enlightened leader is needed–a man with clear, convincing, and inspiring aims and the strength to carry them out. (The inner trigram means clarity; the outer, strength.)

Heaven together with fire:
The image of FELLOWSHIP WITH MEN.
Thus the superior man organizes the clans
And makes distinctions between things.

Heaven has the same direction of movement as fire, yet it is different from fire. Just as the luminaries in the sky serve for the systematic division and arrangement of time, so human society and all things that really belong together must be organically arranged. Fellowship should not be a mere mingling of individuals or of things–that would be chaos, not fellowship. If fellowship is to lead to order, there must be organization within diversity.