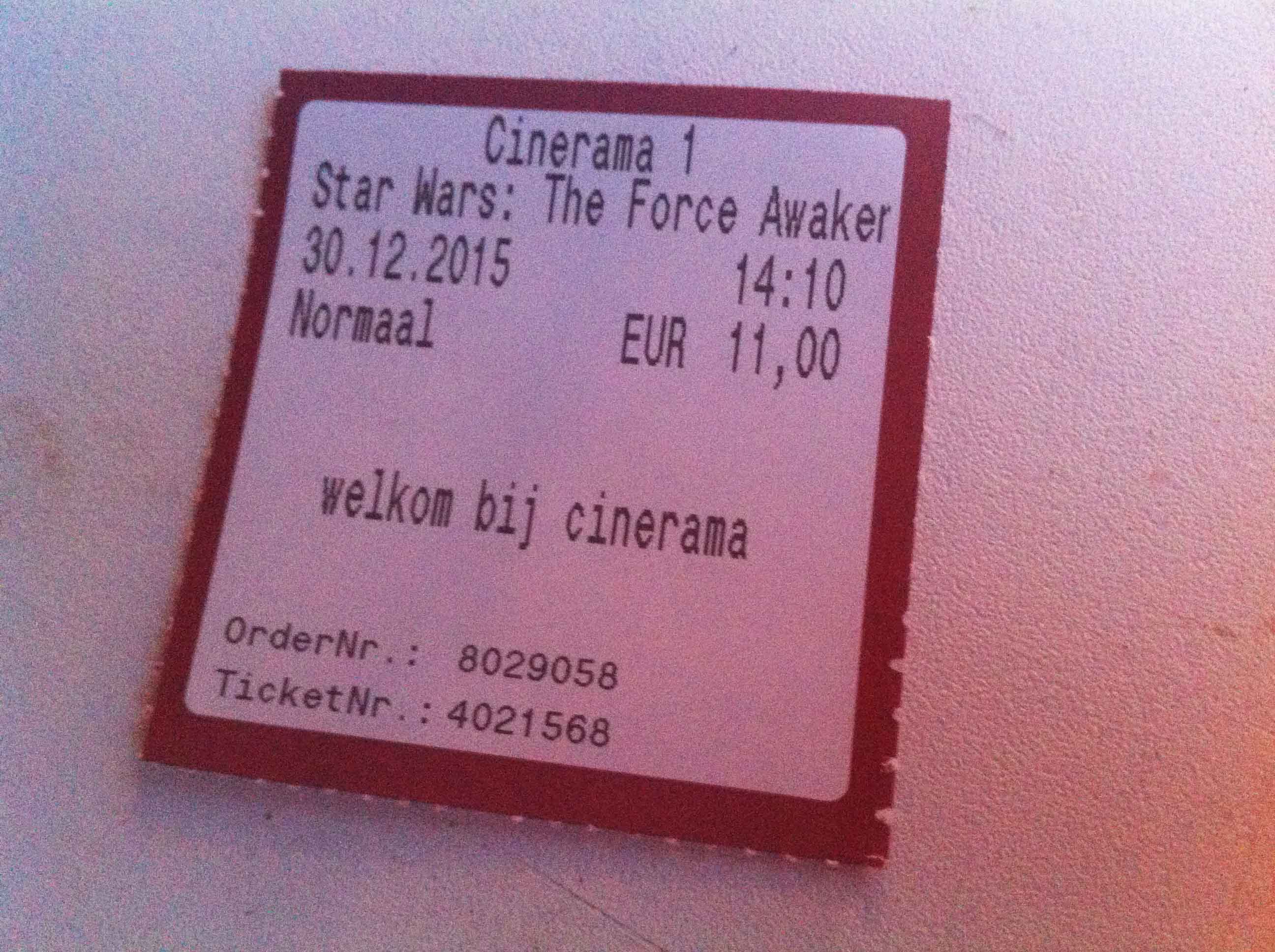 Last week, in my one week off, my one week holiday, my one week of not thinking about posts, what to write, photograph, sing or make, last week i went to a movie. Star Wars: The Force Awakens. In Cinerama, on Wednesday 30 December 2015, starting at 14.10 CET.

I told in The world is terrible i did see the original first movie in 1977 in the cinema. I went together with my nephew. We went out to eat a Big Mac in the new McDonald on the Coolsingel in Rotterdam, before or after.

What I did not mention, i never saw the two upcoming movies in the cinema. I was into new wave music, read less science fiction, and i didn’t go to these blockbuster movies anymore. So yeah, even though i was a sci fi fan for quite some time, that did disappear too for around ten years.

I will talk about this after the break. Completely spoilerish! So please, if you haven’t seen this movie yet, stay away from that part!

My initial thoughts were that i did really enjoy the movie. I enjoyed the main characters, Rey, the light skinned female scavenger, Finn, the dark skinned young escaped Stormtrooper. I like their interaction. From the moment she met BB-8, a droid carrying a secret star-chart to where the old Luke Skywalker was living, which led to her meeting Finn and escaping from them, in the Millennium Falcon, the old ship from Han Solo and Chewbacca stationed on Jutta as a bit of no good wreckage.

I’m sure Rey’s call by the force will be further explained in the next two movies. In this movie there was very little told about her. Her parents are unknown, she took care of herself from a very young age. I’m guessing her parents are either Luke Skywalker or another old Jedi knight. Thinking of the last scenes of this movie, my first bet seems a pretty safe one. I’m not sure if i would actually wish this to be true, as this would be a repetition of a previous story twist. But, we can only wait till Star Wars 8 or 9 is released in a couple of years.

The first review i came across after i saw the movie was the one from Anita Sarkeesian. I enjoyed watching this review. It is pleasantly short, around seven minutes.

Anita did enjoy the movie, and remarked that the two main characters are a female and dark skinned escaped stormtrooper. Just right for a big movie like this.

Her main critique of the movie is the huge violence rushed over in it. A planet or two are destroyed in a few minutes and this fades into the background in only a couple of minutes. The protagonists meet and immediately like each and become friends in minutes. Usually things do not work like this at all out here in the real world.

Another piece i came across was a podcast ‘Star Wars: The Force Awakens Holiday Spectacular’ from John Gruber on his website Daring Fireball. The podcast is really long, two and a half hours; i didn’t listen to the whole part i confess, a bit too chatty really. But the first half hour was a good listen. Amy Jane Gruber was very outspoken in expressing her extreme dislike of Han Solo’s death. By his son, Kylo Ren. On a long one meter wide bridge with no railing over a fire burning deep down below it. I admit, i didn’t see it coming. The movie took over with fast paced action and hardly gave you time to think about this quite big event in the Star Wars universe. But thinking about it now, i have to agree with her. I don’t know the reasons for this death, but it felt to be done too quickly, too careless.

To be honest, the whole Kylo Ren story was weak. He is the son of Han Solo and Leia Organa. He does possess the distorted head of Darth Vader, to which he prays in the movie. It seems he has this fascination for his grandfather. I don’t know any other details about his upbringing. I am reading the Kylo Ren page right now which does explain a lot more, but i’m pretty sure not all of this info was in the movie. It seemed to me, while watching the movie, the thought of someone trying to tempt Han and Leia’s son to the dark side would be ludicrous. The one thing you would think would never happen. The one thing the son would be warned about and raised up to arm himself against.

Still, this is the first part of the new Star Wars movies. Going way back to the 70s and 80s series, with the same energy and frantic story telling. With some of the same old characters played by the same old actors. With some great new characters too. With all the critique you can have, it still was a really enjoyable sit.