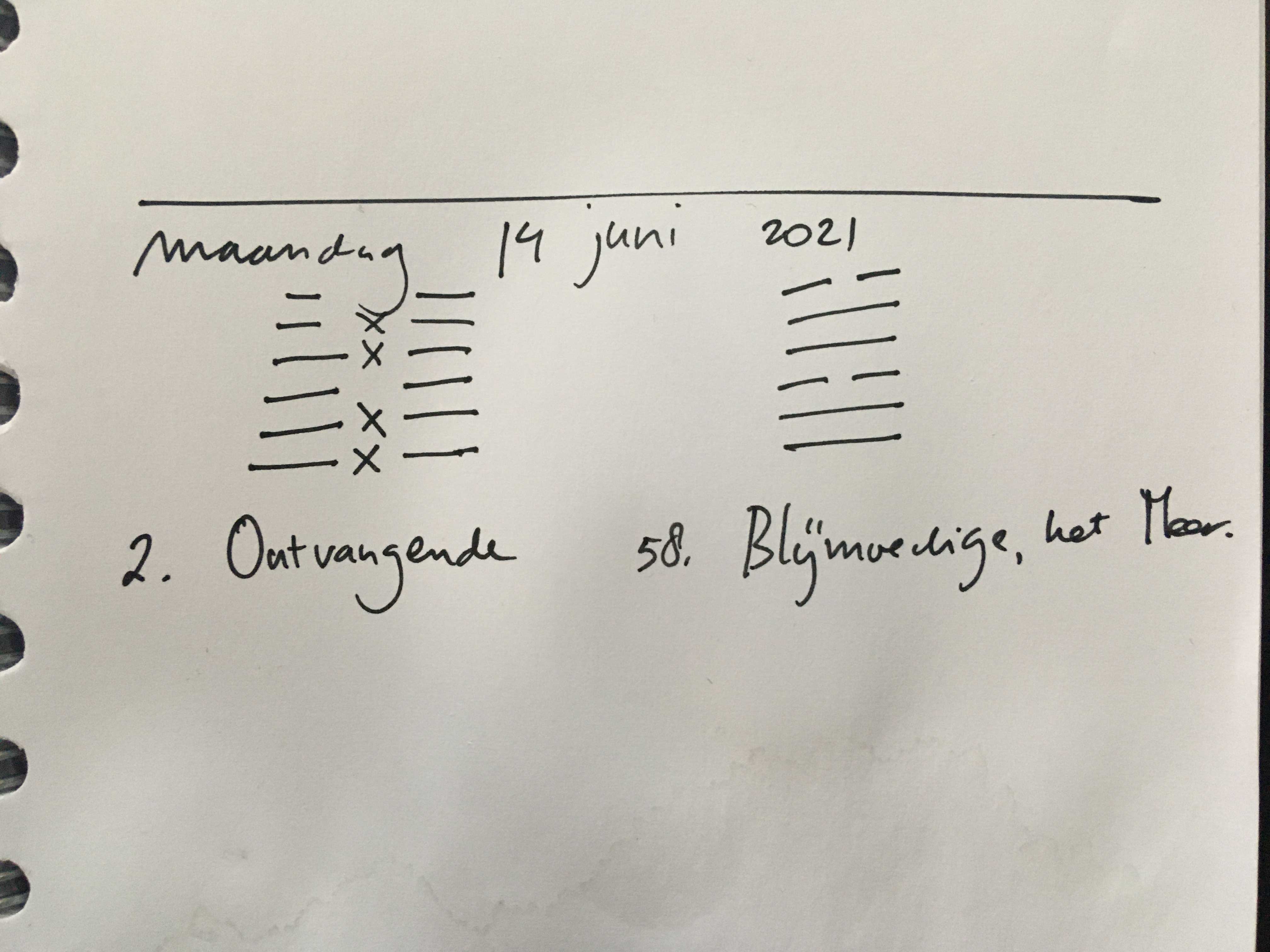 The Receptive > The Joyous Lake

This hexagram is made up of broken lines only. The broken lines represents the dark, yielding, receptive primal power of yin. The attribute of the hexagram is devotion; its image is the earth. It is the perfect complement of THE CREATIVE–the complement, not the opposite, for the Receptive does not combat the Creative but completes it. It represents nature in contrast to spirit, earth in contrast to heaven, space as against time, the female-maternal as against the male-paternal. However, as applied to human affairs, the principle of this complementary relationship is found not only in the relation between man and woman, but also in that between prince and minister and between father and son. Indeed, even in the individual this duality appears in the coexistence of the spiritual world and the world of the senses.
But strictly speaking there is no real dualism here, because there is a clearly defined hierarchic relationship between the two principles. In itself of course the Receptive is just as important as the Creative, but the attribute of devotion defines the place occupied by this primal power in relation to the Creative. For the Receptive must be activated and led by the Creative; then it is productive of good. Only when it abandons this position and tries to stand as an equal side by side with the Creative, does it become evil. The result then is opposition to and struggle against the Creative, which is productive of evil to both.

Just as there is only one heaven, so too there is only one earth. In the hexagram of heaven the doubling of the trigram implies duration in time, but in the hexagram of earth the doubling connotes the solidity and extension in space by virtue of which the earth is able to carry and preserve all things that live and move upon it. The earth in its devotion carries all things, good and evil,, without exception. In the same way the superior man gives to his character breadth, purity, and sustaining power, so that he is able both to support and to bear with people and things.

Six at the beginning means:
When there is hoarfrost underfoot,
Solid ice is not far off.

Just as the light-giving power represents life, so the dark power, the shadowy, represents death. When the first hoarfrost comes in the autumn, the power of darkness and cold is just at its beginning. After these first warnings, signs of death will gradually multiply, until, in obedience to immutable laws, stark winter with its ice is here.
In life it is the same. After certain scarcely noticeable signs of decay have appeared, they go on increasing until final dissolution comes. But in life precautions can be taken by heeding the first signs of decay and checking them in time.

°Six in the second place means:
Straight, square, great.
Without purpose,
Yet nothing remains unfurthered.

The symbol of heaven is the circle, and that of earth is the square. Thus squareness is a primary quality of the earth. On the other hand, movement in a straight line, as well as magnitude, is a primary quality of the Creative. But all square things have their origin in a straight line and into turn form solid bodies. In mathematics, when we discriminate between lines, planes and solids, we find that rectangular planes result from straight lines, and cubic magnitudes from rectangular planes. The Receptive accommodates itself to the qualities of the Creative and makes them its own. Thus a square develops out of a straight line and a cube out of a square. This is compliance with the laws of the Creative; nothing is taken away, nothing added. Therefore the Receptive has no need of a special purpose of its own, nor of any effort’ yet everything turns out as it should.
Nature creates all beings without erring: this is its foursquareness. It tolerates all creatures equally: this is its greatness. Therefore it attains what is right for all without artifice or special intentions. Man achieves the height of wisdom when all that he does is as self-evident as what nature does.

Six in the fourth place means:
A tied-up sack. No blame, no praise.

The dark element opens when it moves and closes when at rest. The strictest reticence is indicated here. The time is dangerous , because any degree of prominence leads either to the enmity of irresistible antagonists if one challenges them or to misconceived recognition if one is complaisant. Therefore a man ought to maintain reserve, be it in solitude or in the turmoil of the world, for there too he can hide himself so well that no one knows him.

Yellow is the color of the earth and of the middle; it is the symbol of that which is reliable and genuine. The lower garment is inconspicuously decorated–the symbol of aristocratic reserve. When anyone is called upon to work in a prominent but not independent position, true success depends on the utmost discretion. A man’s genuineness and refinement should not reveal themselves directly; they should express themselves only indirectly as an effect from within.

This hexagram, like sun, is one of the eight formed by doubling of a trigram. The trigram Tui denotes the youngest daughter; it is symbolized by the smiling lake, and its attribute is joyousness. Contrary to appearances, it is not the yielding quality of the top line that accounts for joy here. The attribute of the yielding or dark principle is not joy but melancholy. However, joy is indicated by the fact that there are two strong lines within, expressing themselves through the medium of gentleness.
True joy, therefore, rests on firmness and strength within, manifesting itself outwardly as yielding and gentle.

THE JOYOUS. Success.
Perseverance is favorable.

The joyous mood is infectious and therefore brings success. But joy must be based on steadfastness if it is not to degenerate into uncontrolled mirth. Truth and strength must dwell in the heart, while gentleness reveals itself in social intercourse. In this way one assumes the right attitude toward God and man and achieves something. Under certain conditions, intimidation without gentleness may achieve something momentarily, but not for all time. When, on the other hand, the hearts of men are won by friendliness, they are led to take all hardships upon themselves willingly, and if need be will not shun death itself, so great is the power of joy over men.

Lakes resting one on the other:
The image of THE JOYOUS.
Thus the superior man joins with his friends
For discussion and practice.

A lake evaporates upward and thus gradually dries up; but when two lakes are joined they do not dry up so readily, for one replenishes the other. It is the same in the field of knowledge. Knowledge should be a refreshing and vitalizing force. It becomes so only through stimulating intercourse with congenial friends with whom one holds discussion and practices application of the truths of life. In this way learning becomes many-sided and takes on a cheerful lightness, whereas there is always something ponderous and one-sided about the learning of the self-taught.