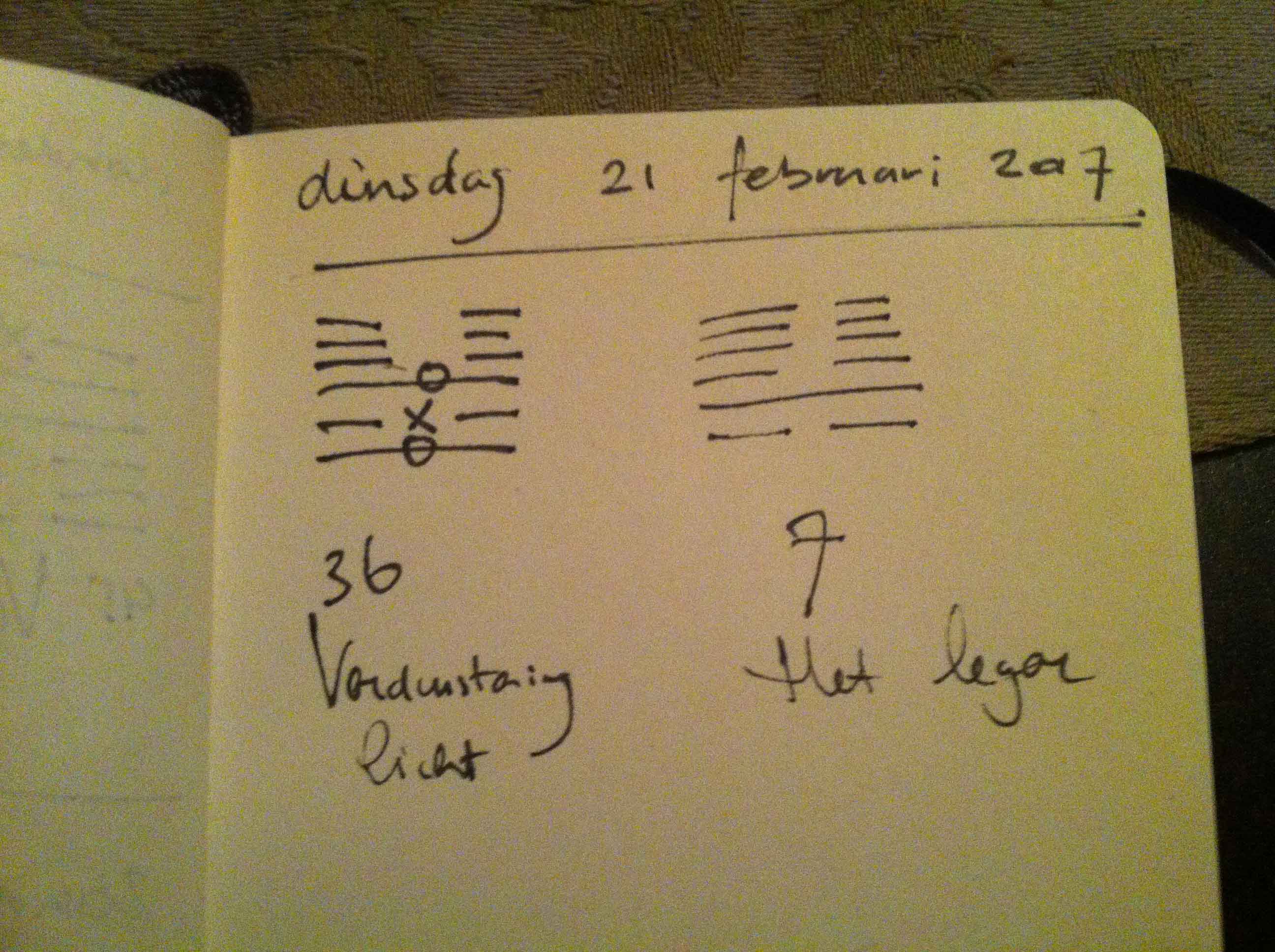 I threw number 36 Ming I / Darkening of the light once more. This time though with three changing lines, all three in the bottom part of the hexagram.

Nine at the beginning means:
Darkening of the light during flight.
He lowers his wings.
The superior man does not eat for three days
On his wanderings.
But he has somewhere to go.
The host has occasion to gossip about him.

With grandiose resolve a man endeavors to soar above all obstacles, but thus encounters a hostile fate. He retreats and evades the issue. The time is difficult. Without rest, he must hurry along, with no permanent abiding place. If he does not want to make compromises within himself, but insists on remaining true to his principles, he suffers deprivation. Never the less he has a fixed goal to strive for even though the people with whom he lives do not understand him and speak ill of him.

° Six in the second place means:
Darkening of the light injures him in the left thigh.
He gives aid with the strength of a horse.
Good fortune.

Here the Lord of Light is in a subordinate place and is wounded by the Lord of Darkness. But the injury is not fatal; it is only a hindrance. Rescue is still possible. The wounded man gives no thought to himself; he thinks only of saving the others who are also in danger. Therefore he tries with all his strength to save all that can be saved. There is good fortune in thus acting according to duty.

Nine in the third place means:
Darkening of the light during the hunt in the south.
Their great leader is captured.
One must not expect perseverance too soon.

It seems as if chance were at work. While the strong, loyal man is striving eagerly and in good faith to create order, he meets the ringleader of the disorder, as if by accident, and seizes him. Thus victory is achieved. But in abolishing abuses one must not be too hasty. This would turn out badly because the abuses have been in existence so long.

I’m not sure. I do see similarities with my current situation. At the moment i am trying to find a bit more peace and quiet, mainly in myself. It is hard. Like, just yet, i listened to classical music. My favorite Rudolf Escher. I had almost forgotten that i still had to write this post for tomorrow. My mind still moves on like a steamroller. Very hard to keep it still. It seems really important.

The coins ended up with sign number 7. Shih / The Army.

Ground water is invisibly present within the earth. In the same way the military power of a people is invisibly present in the masses. When danger threatens, every peasant becomes present in the masses. When danger threatens, every peasant becomes a soldier; when the war ends, he goes back to his plow. He who is generous toward the people wins their love, and a people living under a mild rule becomes strong and powerful. Only a people economically strong can be important in military power. Such power must
therefore be cultivated by improving the economic condition of the people and by humane government. Only when there is this invisible bond between government and people, so that the people are sheltered by their government as ground water is sheltered by the earth, is it possible to wage a victorious war.