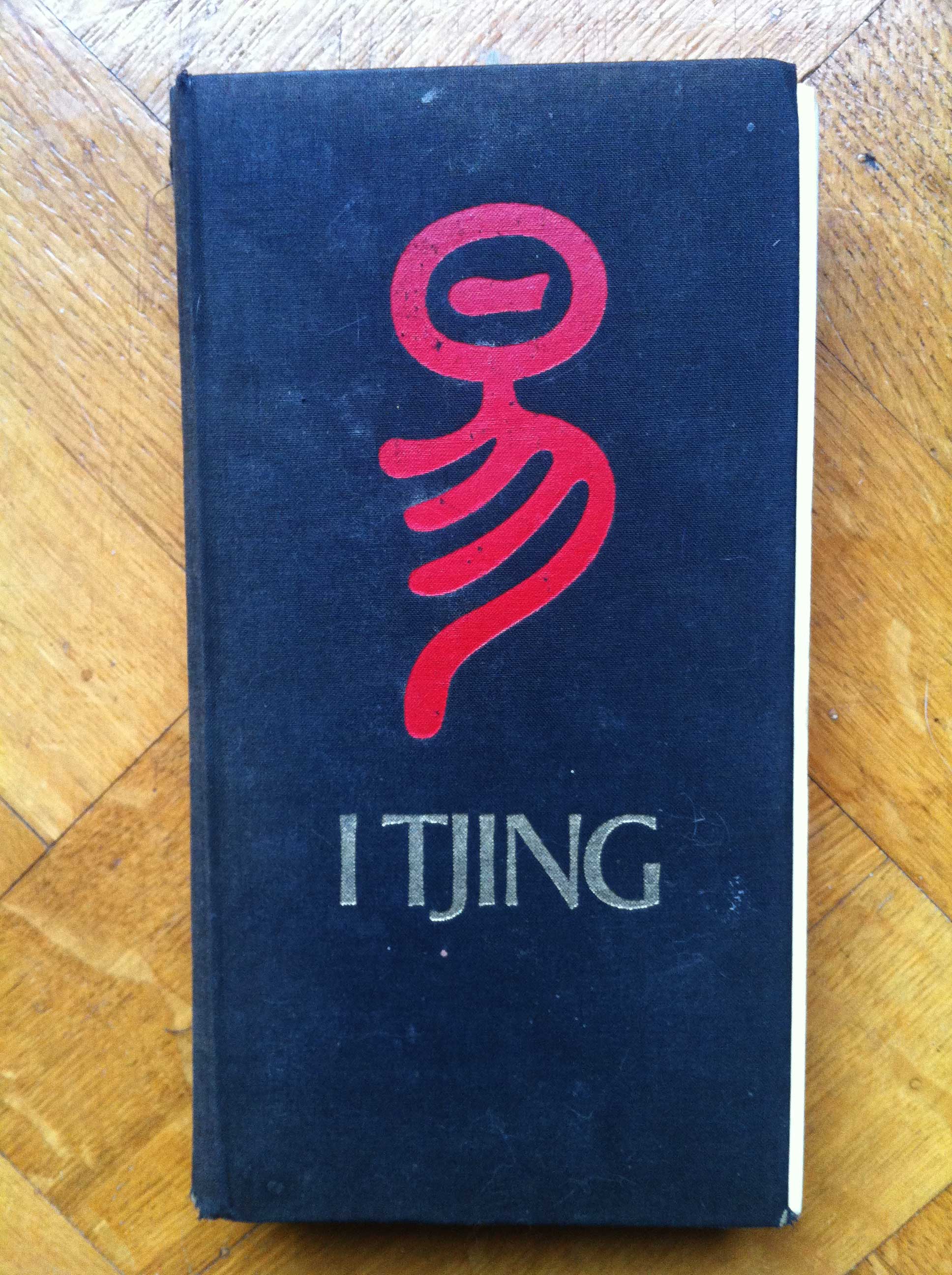 I am not looking for some irrational mystical guidance. Instead, I am looking for a release from the prison of competing certainties, a way of letting loose the simmering doubts and confusions that accompany all thought, so that I can take advantage of their creative richness. In other words, I use the I Ching not as a certainty machine, but as an uncertainty machine. Dissolving false certainties, it integrates the fact of unknowing into the fabric of my thinking, opening me up to hitherto unimagined possibilities, scattering the monotony of my either-or dilemmas into a myriad of forking paths.

I’m not sure when i bought the I Ching. I do know i still lived at my parents’ home. So it was before the end of 1985. The memory is vague, i’m not sure at all about it, but it could be my sister had the book. And i was mystified by it. So yes, i got me a copy.

Writing in a diary was a big part of my life over the next years. And i usually threw coins to read a hexagram of the I Ching afterwards. I don’t think i had any specific question. It was more asking for a comment on what i felt, what i had written just before.

Some throws i do remember. The one after i had bought Songs To Remember, only a few days after i made the drawings i gave away last year. That one still stands out for me. Not that i understand it. No. But it felt, well, true. Real. Number 13 ䷌ Fellowship with Men with a changing line on number 5. Confucius said the following words, connected with this line:

Life leads the thoughtful man on a path of many windings.
Now the course is checked, now it runs straight again.
Here winged thoughts may pour freely forth in words,
There the heavy burden of knowledge must be shut away in silence.
But when two people are at one in the inmost hearts,
They shatter even the strength of iron or of bronze.
And when two people understand each other in their inmost hearts,
Their words are sweet and strong, like the fragrance of orchids.

Another sign which i felt was true to me, was number 56 The Wanderer ䷷. Even though in my life i have been in one place, i don’t feel truly at home. I have found a place where i can live quietly, by myself. But that is it. It still feels like a place of transition. 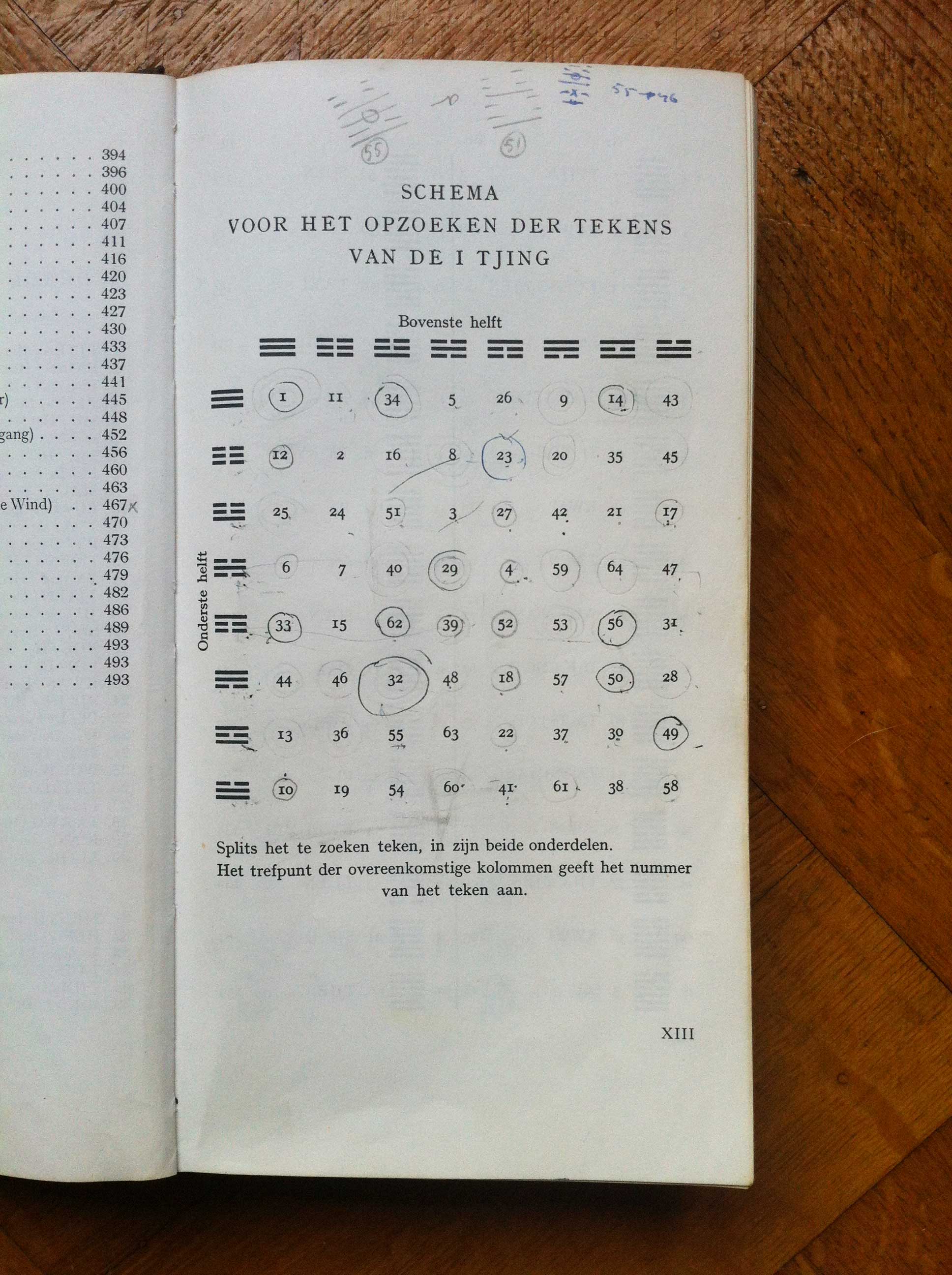 This week i did read the I Ching. I focused on the preface written by Prof. Dr. C.G. Jung, the second book The Material with background information about the hexagrams and the third book with the comments about the hexagrams. The images and concepts connected with the eight trigrams are all from the old world. Parts of the body, the family, animals and the world. The wind, the sun, the mountain, water, wood, thunder and lightning are part of this. In the I Ching wikipedia article it says: In its current form the current compilation is dated to the early decades of the reign of King Xuan of Zhou, in the last quarter of the 9th century BC.

I do enjoy reading the book in hexagrams. Throwing the coins gives you one or two hexagrams to read and think about. Sometimes it gives you a lot of information, sometimes not. I’m pretty sure it depends on yourself how the message comes through. It has given me a growing knowledge of this old world.

Today i downloaded a book called The Philosophy of the I Ching written by Carol K. Anthony.

Fate, as an obstruction, is a door that can be unlocked, but only by the proper key – which is a correct attitude. Upon correcting our attitude we find that our situation improves; but if we then become careless and revert to the incorrect attitude, the door closes once more. Fate, as an obstruction, seems to match us move for move once we have come to this impasse; where we once seemed to be free to err, with no penalty attached, now we have to immediately pay for every mistake; it is as if we have our credit card taken away.

This does remind me of the past two years. I love working in the garden. But i did have some conflicts with other people working there. I remember feeling opposed, as i feel i’m such a nice and good person. This is not true. Of course it isn’t true. I have many sides specked with darkness. Selfishness, thinking of myself alone. It requires work to deal with these parts of myself. 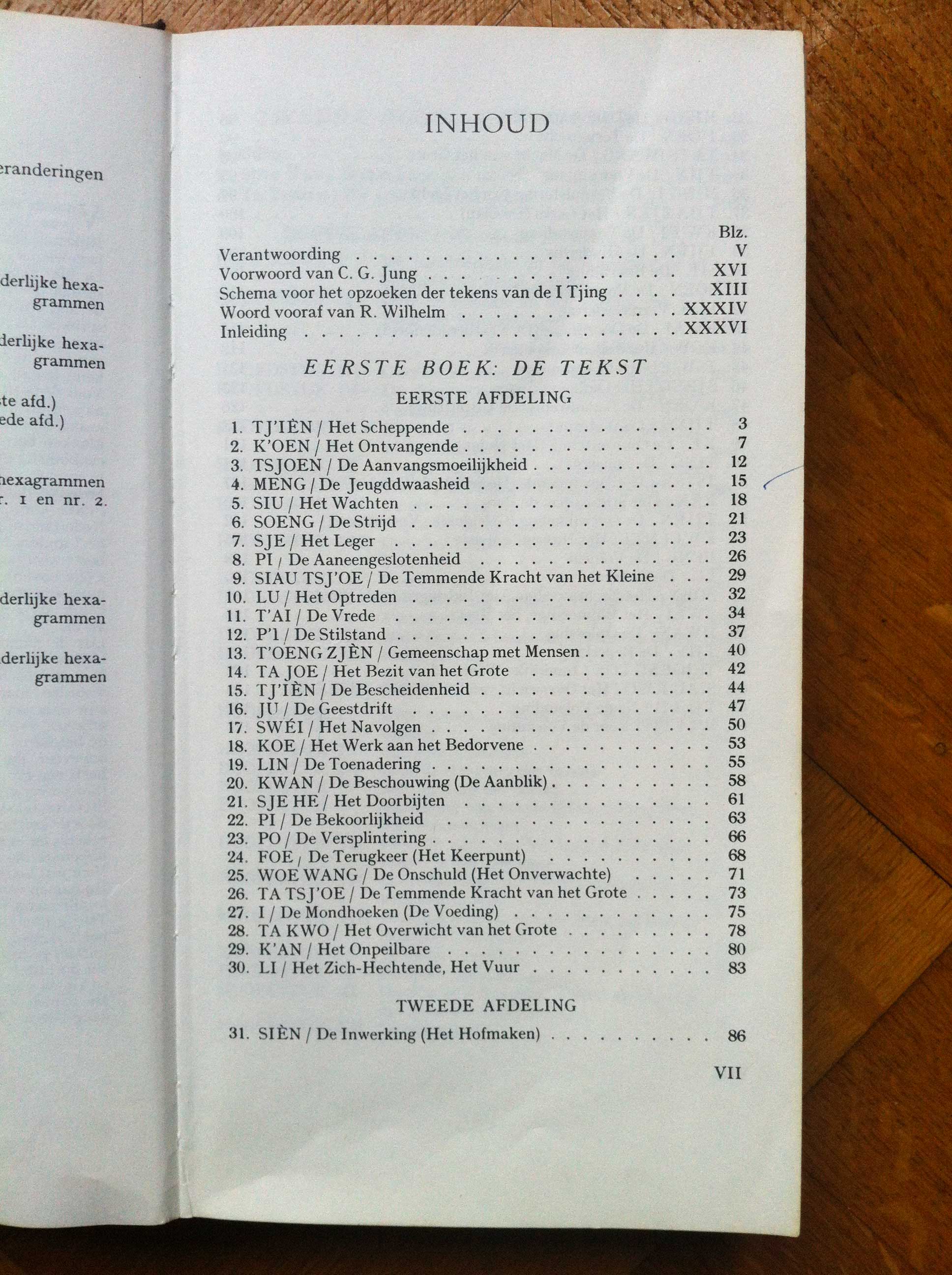 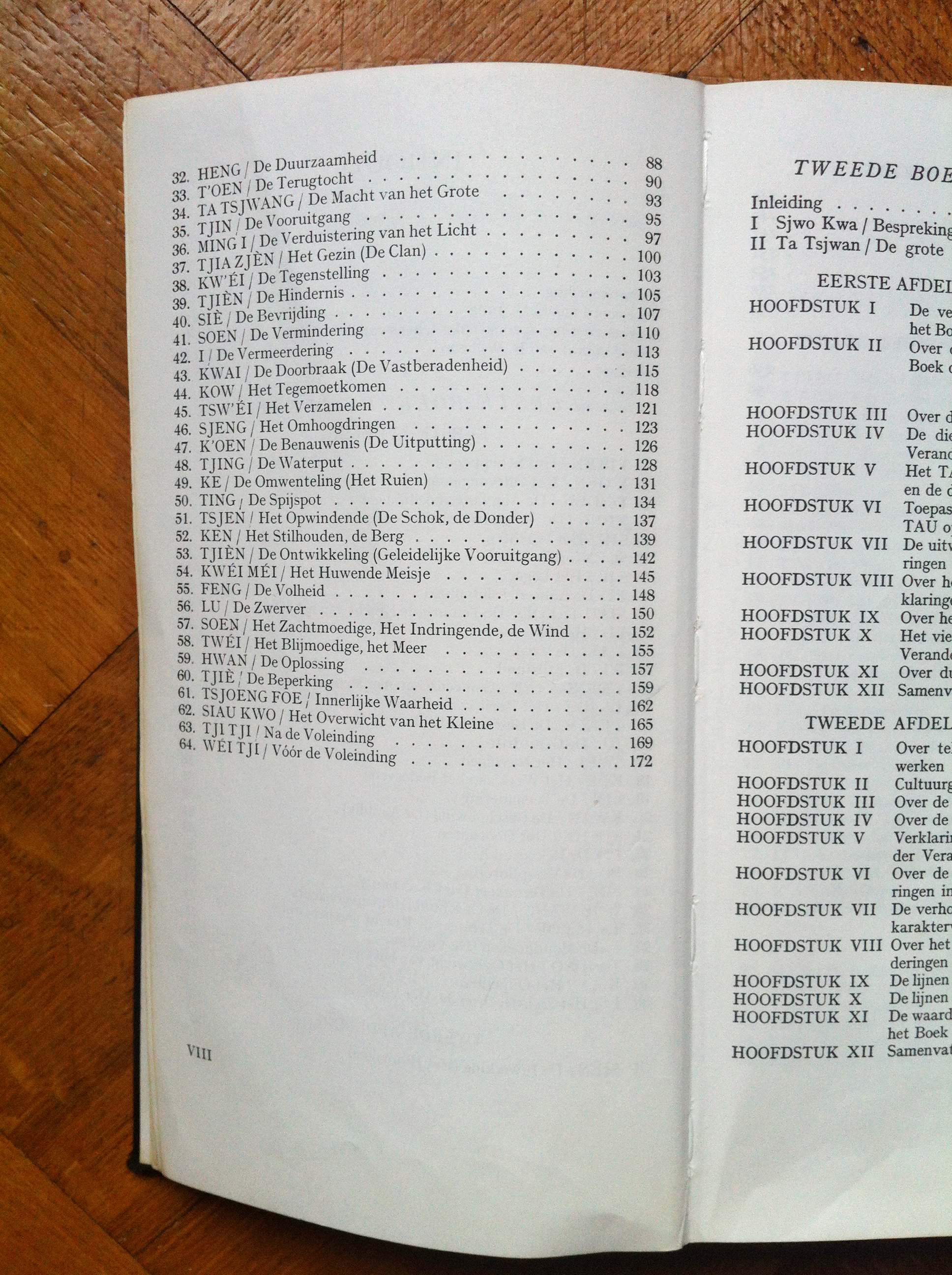 I won’t be able to discuss the I Ching in its entirety in this post. Hell no. There are so many parts which i need to learn more about, and i’m not sure i will have the time to do so in my life. It is the outdoor or the indoor life once again. I don’t know what life will come my way. I don’t know if i have the courage to grab it once it passes by. If it passes by. I still have hope. 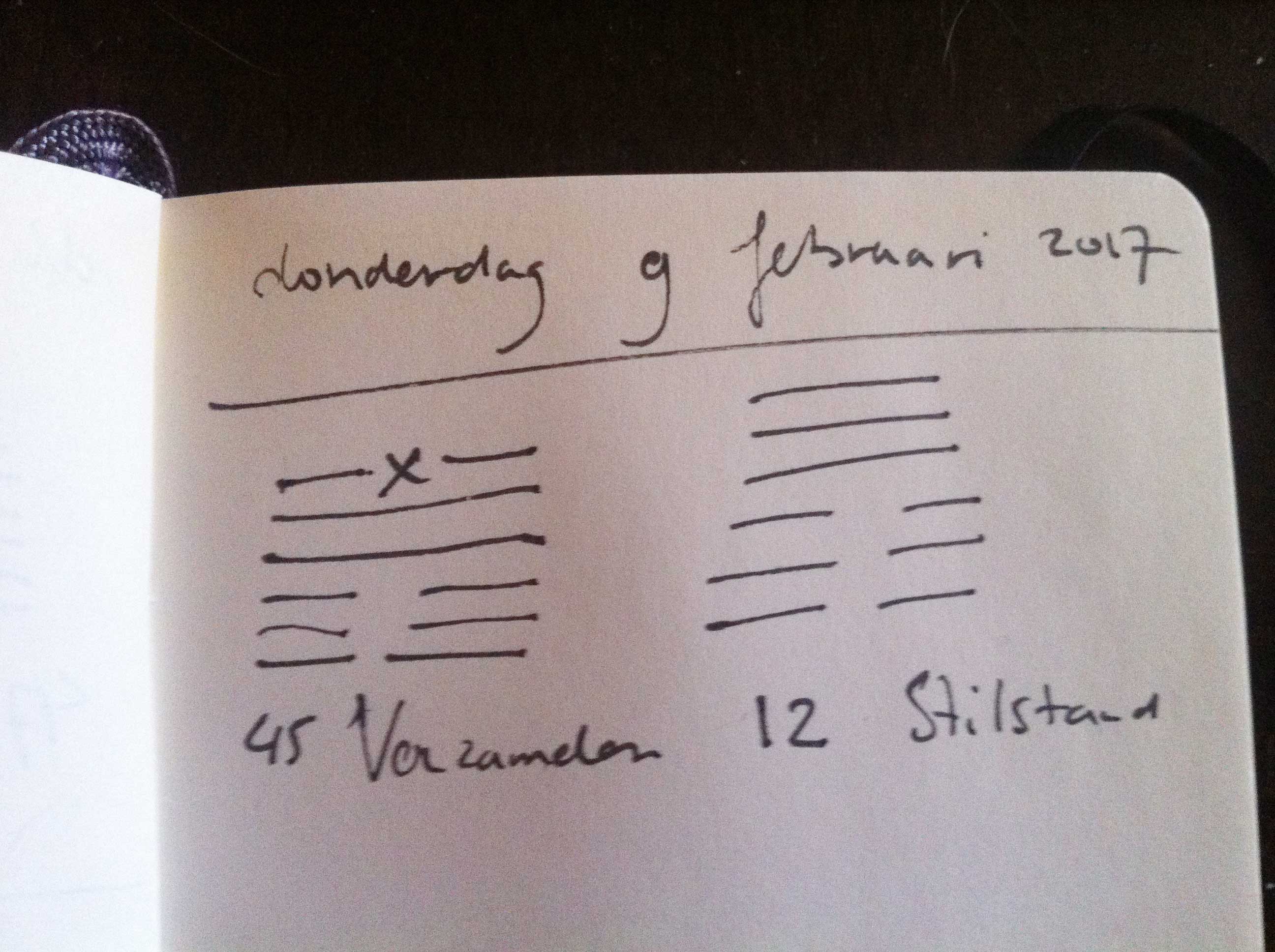 I did throw my coins today. With the general idea that writing this post would be an important issue.

The gathering together of people in large communities is either a natural occurrence, as in the case of the family, or an artificial one, as in the case of the state. The family gathers about the father as its head. The perpetuation of
this gathering in groups is achieved through the sacrifice to the ancestors, at which the whole clan is gathered together. Through the collective piety of the living members of the family, the ancestors become so integrated in the spiritual life of the family that it cannot be dispersed or dissolved.
Where men are to be gathered together, religious forces are needed. But there must also be a human leader to serve as the center of the group. In order to be able to bring others together, this leader must first of all be collected within himself. Only collective moral force can unite the world. Such great times of unification will leave great achievements behind them. This is the significance of the great offerings that are made. In the secular sphere likewise there is no need of great deeds in the time of GATHERING TOGETHER.

If the water in the lake gathers until it rises above the earth, there is danger of a break-through. Precautions must be taken to prevent this. Similarly where men gather together in great numbers, strife is likely to arise; where possessions are collected, robbery is likely to occur. hus in the time of GATHERING TOGETHER we must arm promptly to ward off the unexpected. Human woes usually come as a result of unexpected events against which we are not forearmed. If we are prepared, they can be prevented.

Six at the top means:
Lamenting and sighing, floods of tears.
No blame.

It may happen that an individual would like to ally himself with another, but his good intentions are misunderstood. Then he becomes sad and laments. But this is the right course. For it may cause the other person to come to his senses, so that the alliance that has been sought and so painfully missed is after all achieved.

above CH’IEN THE CREATIVE, HEAVEN
below K’UN THE RECEPTIVE, EARTH

This hexagram is the opposite of the preceding one. Heaven is above, drawing farther and farther away, while the earth below sinks farther into the depths. The creative powers are not in relation. It is a time of standstill and decline. This hexagram is linked with the seventh month (August-September), when the year has passed its zenith and autumnal decay is setting in.

STANDSTILL. Evil people do not further
The perseverance of the superior man.
The great departs; the small approaches.

Heaven and earth are out of communion and all things are benumbed. What is above has no relation to what is below, and on earth confusion and disorder prevail. The dark power is within, the light power is without. Weakness is within, harshness without. Within are the inferior, and without are the superior. The way of inferior people is in ascent; the way of superior people is one the decline. But the superior people do not allow themselves to be turned from their principles. If the possibility of exerting influence is closed to them, they nevertheless remain faithful to their principles and withdraw into seclusion.

Heaven and earth do not unite:
The image of STANDSTILL.
Thus the superior man falls back upon his inner worth
In order to escape the difficulties.
He does not permit himself to be honored with revenue.

When, owing to the influence of inferior men, mutual mistrust prevails in public life, fruitful activity is rendered impossible, because the fundaments are wrong. Therefore the superior man knows what he must do under such circumstances; he does not allow himself to be tempted by dazzling offers to take part in public activities. This would only expose him to danger, since he cannot assent to the meanness of the others. He therefore hides his worth and withdraws into seclusion.

I was first a bit caught off guard by the second sign, Standstill. In my understanding this sign is not a positive one; a time of standstill and decline. But, the final paragraph of The Philosophy of the I Ching says the following.

Our job is no less than to put the world in order. We can do this only by being responsive to the Divine Will. The ability of man to act as a conduit for the Divine Will makes him the third primal power, giving him a unique capacity and responsibility to “further.” As the top of Standstill (12) says, “left to itself,” everything changes toward “stagnation and disintegration. The time of disintegration… does not change back automatically to a condition of peace and prosperity; effort must be put forth to end it. This shows the creative attitude that man must take if the world is to be put in order.” This creative work falls to each person who sees that the job must be undertaken, and who cannot turn his back upon the task.

To me, this does say something about my current situation. For the past two and a half years i felt woken up, that sledgehammer feeling i talked about here at times. I have worked hard, these past two years. Actually, today, 9 February, the day i’m writing this post, it is exactly two years that this blog exists.

I have touched many areas. I have written about very personal things here. I have tried new things. And yes, i am surprised that not more people are coming here. I am. But, parts of me thought that living with this blog in the shade was giving me time to think my life through, to come to some sort of decision.