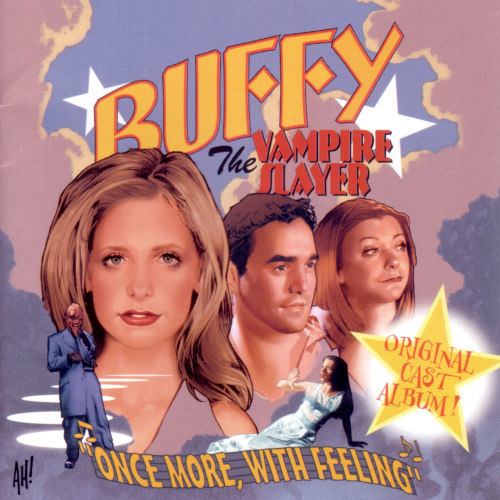 Going Through the Motions

Buffy the Vampire Slayer is one of my most favourite television shows of all time. Yeah, ok, Firefly is up there too, it had a great half a series run. But the seven seasons of Buffy are so wonderful. The late 90s, watching the show on television, it was so much fun. I don’t think i remembered at the time i actually had seen the movie Buffy the Vampire Slayer in 92 or 93 at the Rotterdam Filmfestival. It was one of my more easy going picks end i enjoyed it so much then.

This episode, Once More, With Feeling, is the special musical episode. When this episode was broadcasted in the Netherlands, the net didn’t know what to do with this. They decided to broadcast it out of the usual time for Buffy, later at night. So stupid! This episode is in the top three list of my favourite Buffy ones. Together with Hush and The Body.

Watching Buffy was the start of my admiration of Joss Whedon. A thoroughly nice person with up until now excellent taste in choosing the right direction to go into. Starting with Buffy, then Angel, Firefly, Dolllhouse and ending with the Avengers blockbusters. Hopefully more will follow.

So, i tried to sing the first song of Once more, With Feeling. It is hard, to sing a cappella, i admit. Hard to hold the tune. As you may have noticed in my earlier songs. Still, it was great hearing and seeing all the songs once again. All the clips are included in this post. Enjoy!

Going Through The Motions – Once More With Feeling, Buffy
BUFFY:
Every single night
The same arrangement
I go out and fight the fight
Still, I always feel the strange estrangement
Nothing here is real
Nothing here is right

VAMP:
She ain’t got that swing

BUFFY:
Thanks for noticing

GOAT DEMON:
She’s not even half the girl she…ow.

BUFFY:
Will I stay this way forever?
Sleepwalk through my life’s endeavor?

VERY HANDSOME GUY:
How can I repay—

BUFFY:
Whatever.
I don’t want to be
Going through the motions
Losing all my drive
I can’t even see
If this is really me
And I just want to be
Alive!

The original start of the Buffy episode Once More, With Feeling

And the rest of the songs…