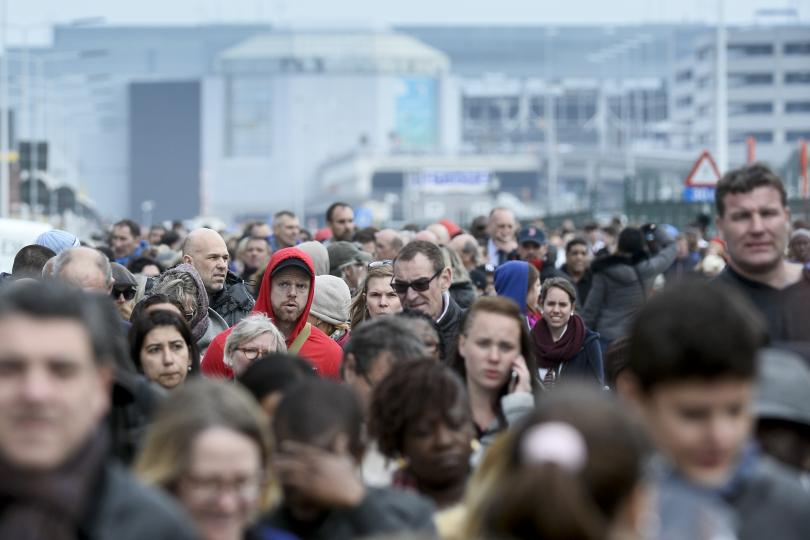 This past week, on Tuesday, in the morning i was sitting behind my computer. I routinely went through my twitter feed. I saw a strange picture. Sort of a train station with messy black and white parts of the ceiling or wall on the floor. I looked further down. I saw more tweets, but only thirty minutes back. Something was going on.

I turned on the television. There it was. The Dutch journal with an extra edition. Explosions in the airport Zaventem in Brussels. I switched to the Belgian tv.

That entire morning i was watching the news. Switching between Dutch, Belgian and British tv. I saw the footage of people running out of the halls in Zeventem. The short clips of people climbing out of metro train in Brussels. People crying, other people quiet. The city becoming more silent, with only heavenly guarded police and militairs on the street. My mind went to friends who are living in Brussels for over ten years.

I saw the speach of our prime minister Rutte, around half past eleven.

Those words went through my head over the next few days. So being with more means what? The majority wins? What if we got into war with China? India? There are more of them.

Over the next few days i read more articles about Brussels and the responses of our politicians.

“An attack on our values.”

We can not live in this make believe innocence in which we inhabit this perfect land where nothing bad ever happens. We do not. Our Western European world is as internally conflicted as all the other parts of the world. We do sweep it under the carpet. Out of sight, out of mind. But it is still there.

We do have a certain amount of freedom. Especially the indigenous people of Western Europe do have the possibilities and chances to find what they most want to do in their live. It is hard though, in this neoliberal world with fast four years studies, high debts and expensive living costs.

The last war in Western Europe ended in 1945. Seventy years ago. In those years our western world has evolved in a rich, polluted and contaminated, globalizing, expressive and rude world inhabited with people unaware of what a war can be like. People taking our hard won peace for granted. Most of us. Me too.

We live in this highly coated world with shop fronts the same around every city in Europe. We do not apply any terrorist action. Of course not. Other do those actions to us. The innocent, happily buying stuff, dancing and eating and drinking Europeans.

A few days after the attack, Johan Cruyff died. Every news show was showering his memory with love and adoration. The last symbol of our Dutch glory. So it was said.

I am not a football fan. Not a Johan Cruyff fan. It is not my world. I watched some of the shows with amazement. Not my place to say anything more about it.

Microsoft pulled its chatbot Tay from Twitter. In less than 24 hours its tweets changed from the innocent to the outright dark. Since it was learning from tweets targeting at it, all its noises were coming from other people, “a pack of sadistic psychopaths”.

We do have problems.

The entire world has problems.

I don’t have solutions. I simply think about what is happening, what people say, what people do. I don’t do this every single day. But this past week, i did.

I am not able to find an answer on my own.

I am happy to search.

Links
Most of these links refer to Dutch or Belgian articles. Some may be behind a paywall.