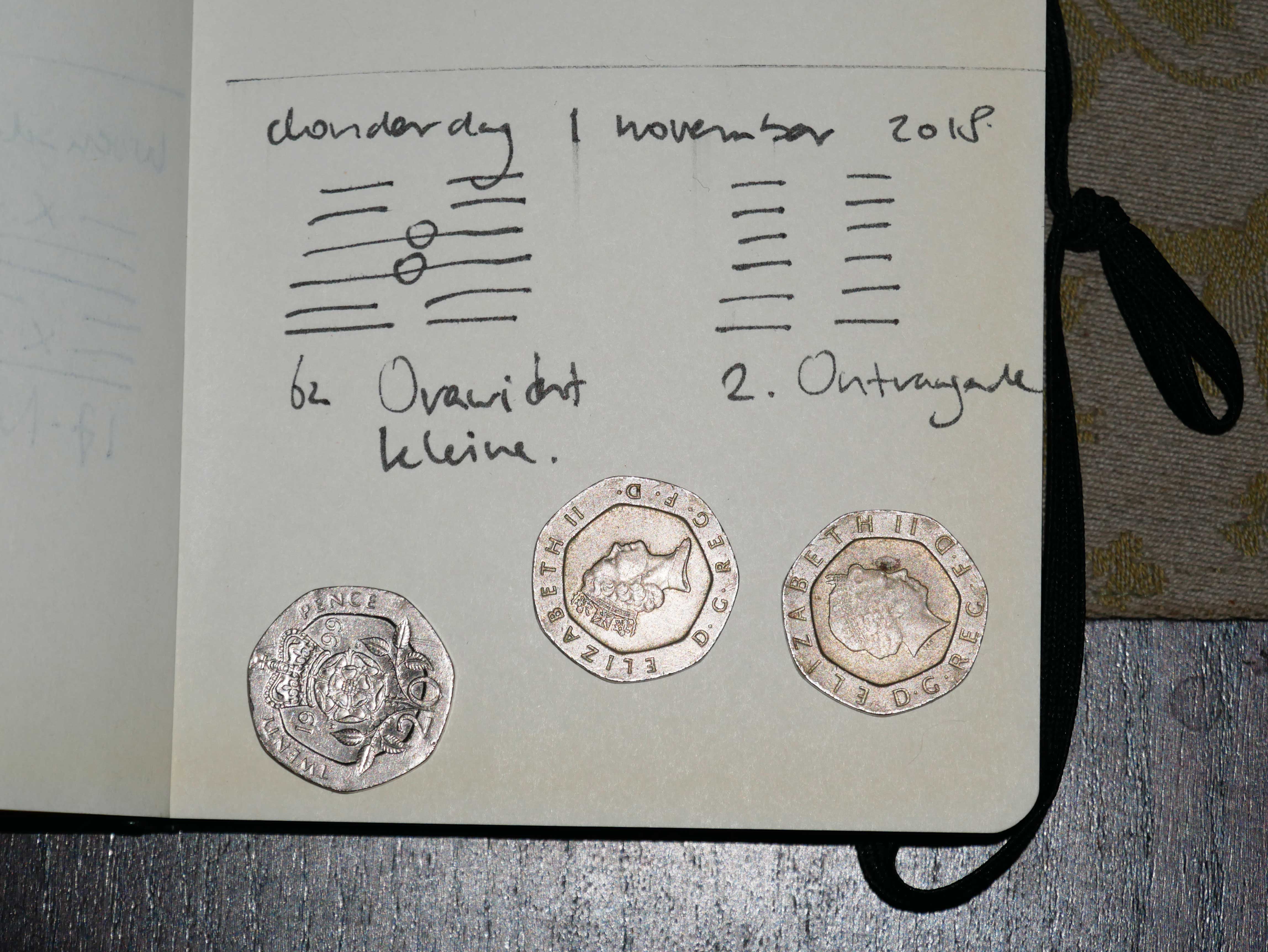 Nine in the third place means:
If one is not extremely careful,
Somebody may come up from behind and strike him.
Misfortune.

At certain times extraordinary caution is absolutely necessary. But it is just in such life situations that we find upright and strong personalities who, conscious of being in the right, disdain to hold themselves on guard, because they consider it petty. Instead, they go their way proud and unconcerned. But this self-confidence deludes them. There are dangers lurking for which they are unprepared. Yet such danger is not unavoidable; one can escape it if he understands that the time demands that he pay especial attention to small and insignificant thing.

Nine in the fourth place means:
No blame. He meets him without passing by.
Going brings danger. One must be on guard.
Do not act. Be constantly persevering.

Hardness of character is tempered by yielding position so that no mistakes are made. The situation here calls for extreme caution; one must make no attempt of one’s own initiative to reach the desired end. And if one were to go on, endeavoring one must be on guard and not act but continue inwardly to persevere.

This hexagram is made up of broken lines only. The broken lines represents the dark, yielding, receptive primal power of yin. The attribute of the hexagram is devotion; its image is the earth. It is the perfect complement of THE CREATIVE–the complement, not the opposite, for the Receptive does not combat the Creative but completes it . It represents nature in contrast to spirit, earth in contrast to heaven, space as against time, the female-maternal as against the male-paternal. However, as applied to human affairs, the principle of this complementary relationship is found not only in the relation between man and woman, but also in that between prince and minister and between father and son. Indeed, even in the individual this duality appears in the coexistence of the spiritual world and the world of the senses.
But strictly speaking there is no real dualism here, because there is a clearly defined hierarchic relationship between the two principles. In itself of course the Receptive is just as important as the Creative, but the attribute of devotion defines the place occupied by this primal power in relation to the Creative. For the Receptive must be activated and led by the Creative; then it is productive of good. Only when it abandons this position and tries to stand as an equal side by side with the Creative, does it become evil. The result then is opposition to and struggle against the Creative, which is productive of evil to both.

Just as there is only one heaven, so too there is only one earth. In the hexagram of heaven the doubling of the trigram implies duration in time, but in the hexagram of earth the doubling connotes the solidity and extension in space by virtue of which the earth is able to carry and preserve all things that live and move upon it. The earth in its devotion carries all things, good and evil, without exception. In the same way the superior man gives to his character breadth, purity, and sustaining power, so that he is able both to support and to bear with people and things.