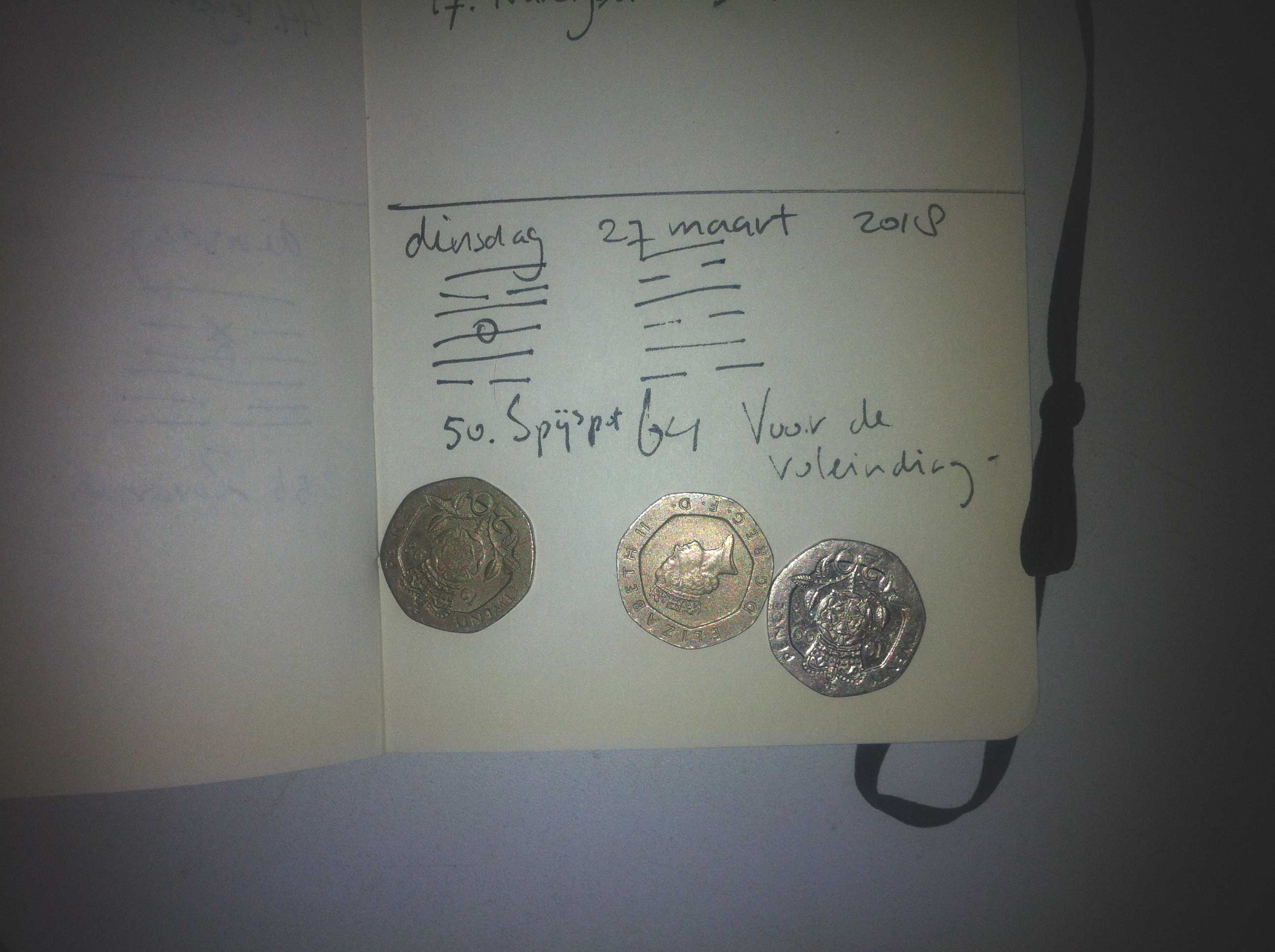 Nine in the third place means:
The handle of the ting is altered.
One is impeded in his way of life.
The fat of the pheasant is not eaten.
Once rain falls, remorse is spent.
Good fortune comes in the end.

The handle is the means for lifting up the ting. If the handle is altered, the ting cannot be lifted up and used, and, sad to say, the delicious food in it, such as pheasant fat, cannot be eaten by anyone.
This describes a man who, in a highly evolved civilization, finds himself in a place where no one notices or recognizes him. This is a severe block to his effectiveness. All of his good qualities and gifts of mind thus needlessly go to waste. But if he will only see to it that he is possessed of something truly spiritual, the time is bound to come, sooner or later, when the difficulties will be resolved and all will go well. The fall of rain symbolizes here, as in other instances, release of tension.

above LI THE CLINGING, FLAME
below K’AN THE ABYSMAL, WATER

This hexagram indicates a time when the transition from disorder to order is not yet completed. The change is indeed prepared for, since all the lines in the upper trigram are in relation to those in the lower. However, they are not yet in their places. While the preceding hexagram offers an analogy to autumn, which forms the transition from summer to winter, this hexagram presents a parallel to spring, which leads out of winter’s stagnation into the fruitful time of summer. With this hopeful outlook the Book of Changes come to its close.

BEFORE COMPLETION. Success.
But if the little fox, after nearly completing the crossing,
Gets his tail in the water,
There is nothing that would further.

The conditions are difficult. The task is great and full of responsibility. It is nothing less than that of leading the world out of confusion back to order. But it is a task that promises success, because there is a goal that can unite the forces now tending in different directions. At first, however, one must move warily, like an old fox walking over ice. The caution of a fox walking over ice is proverbial in China. His ears are constantly alert to the cracking of the ice, as he carefully and circumspectly searches out the safest spots. A young fox who as yet has not acquired this caution goes ahead boldly, and it may happen that he falls in and gets his tail wet when he is almost across the water. Then of course his effort has been all in vain. Accordingly, in times “before completion,” deliberation and caution are the prerequisites of success.

Fire over water:
The image of the condition before transition.
Thus the superior man is careful
In the differentiation of things,
So that each finds its place.

When fire, which by nature flames upward, is above, and water, which flows downward, is below, their effects take opposite directions and remain unrelated. If we wish to achieve an effect, we must first investigate the nature of the forces in question and ascertain their proper place. If we can bring these forces to bear in the right place, they will have the desired effect and completion will be achieved. But in order to handle external forces properly, we must above all arrive at the correct standpoint ourselves, for only from this vantage can we work correctly.