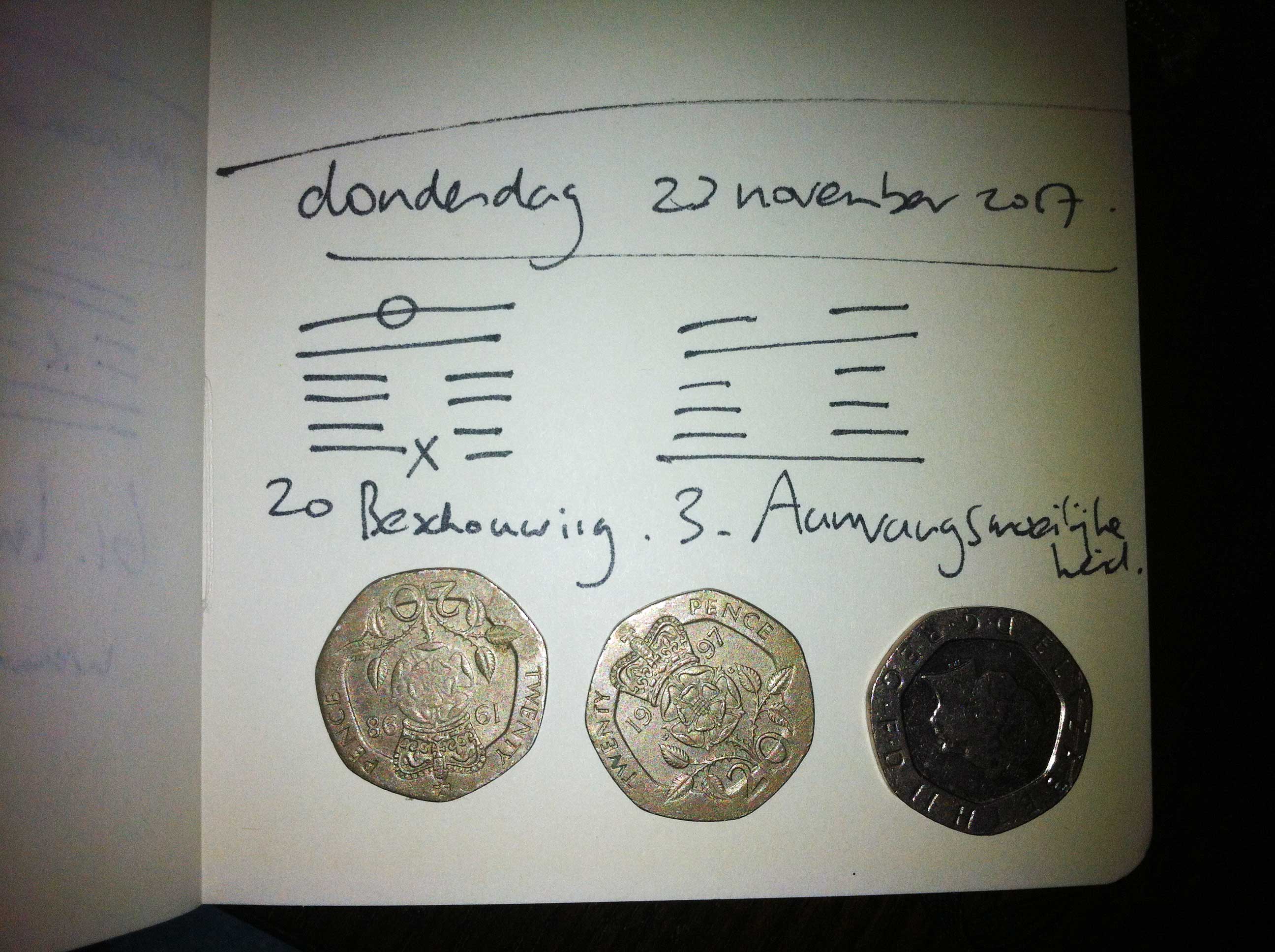 I was tired today. I played World of Warcraft. I watched Buffy, halfway the third season. I did some shopping. Got stuff for the cakes i will bake for Sunday. There is a small market then on the Peace Garden. Cakes and chocolate chip cookies. A talk with the real estate agent. Monday i will have my decision ready.

And this evening i feel so happy. Like, singing and dancing happy. Like, it is all easy. All decisions simply come. Easy.

And just yet i threw coins for the I Ching. Contemplation. With a changing line on the first and sixth place. With Difficulty at the Beginning as the final sign.

This does mean something to me. I do feel my life is aligned with something out there. With difficulty. It took me so long. To let it go.

CONTEMPLATION. The ablution has been made,
But not yet the offering.
Full of trust they look up to him.

The sacrificial ritual in China began with an ablution and a libation by which the Deity was invoked, after which the sacrifice was offered. The moment of time between these two ceremonies is the most sacred of all, the moment of deepest inner concentration. If piety is sincere and expressive of real faith, the contemplation of it has a transforming awe-spiring effect on those who witness it.
Thus also in nature a holy seriousness is to be seen in the fact that natural occurrences are uniformly subject to law. Contemplation of the divine meaning underlying the workings of the universe gives to the man who is called upon to influence others the means of producing like effects. This requires that power of inner concentration which religious contemplation develops in great men strong in faith. It enables them to apprehend the mysterious and divine laws of life, and by means of profoundest inner concentration they give expression to these laws in their own persons. Thus a hidden spiritual power emanates from them, influencing and dominating others without their being aware of how it happens.

The wind blows over the earth:
The image of CONTEMPLATION.
Thus the kings of old visited the regions of the world,
Contemplated the people,
And gave them instruction.

When the wind blows over the earth it goes far and wide, and the grass must bend to its power. These two occurrences find confirmation in the hexagram. The two images are used to symbolize a practice of the kings of old; in making regular journeys the ruler could, in the first place, survey his realm and make certain that none of the existing usages of the people escaped notice; in the second, he could exert influence through which such customs as were unsuitable could be changed.
All of this points to the power possessed by a superior personality. On the one hand, such a man will have a view of the real sentiments of the great mass of humanity and therefore cannot be deceived; on the other, he will impress the people so profoundly, by his mere existence and by the impact of his personality, that they will be swayed by him as the grass by the wind.