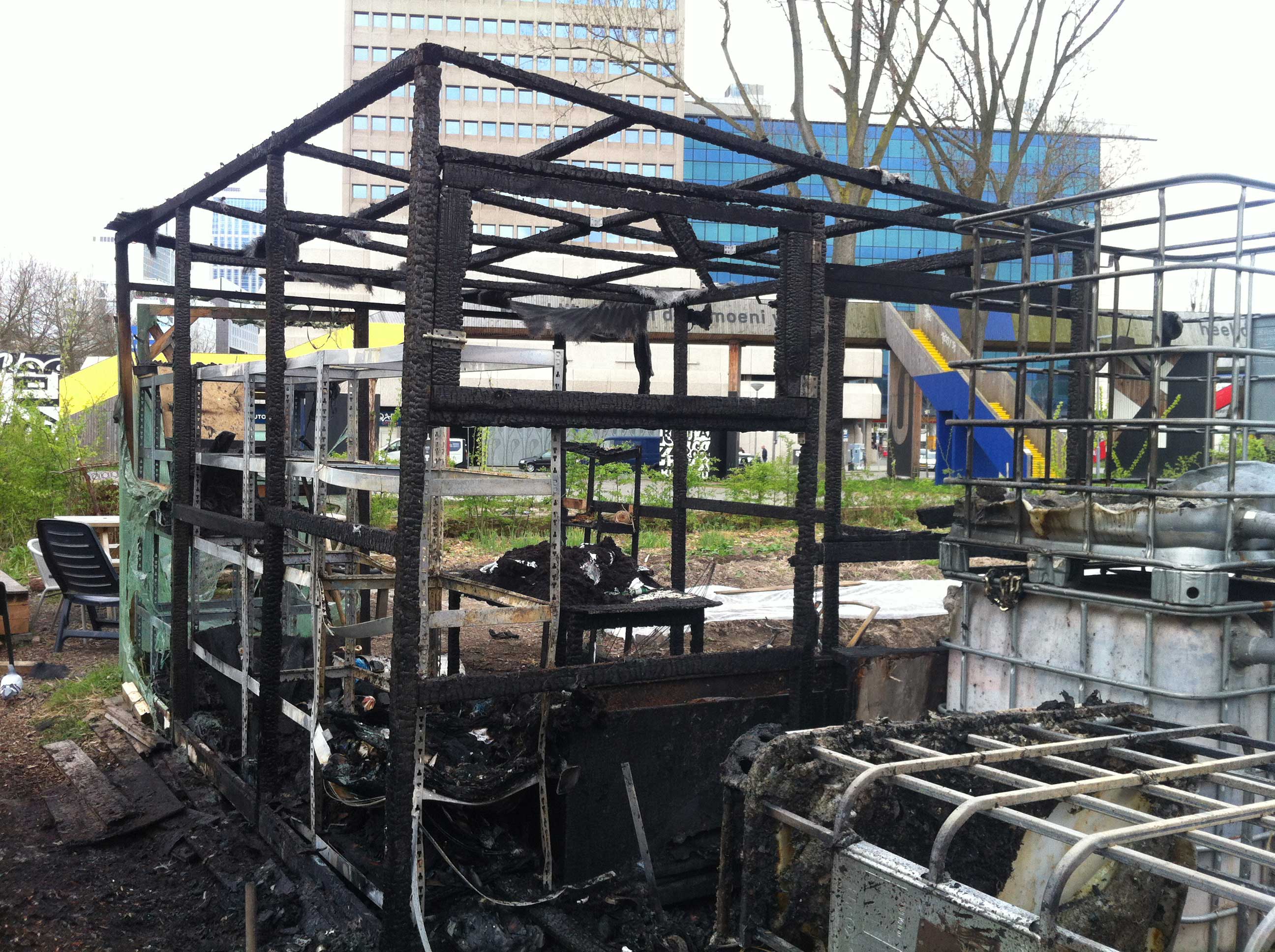 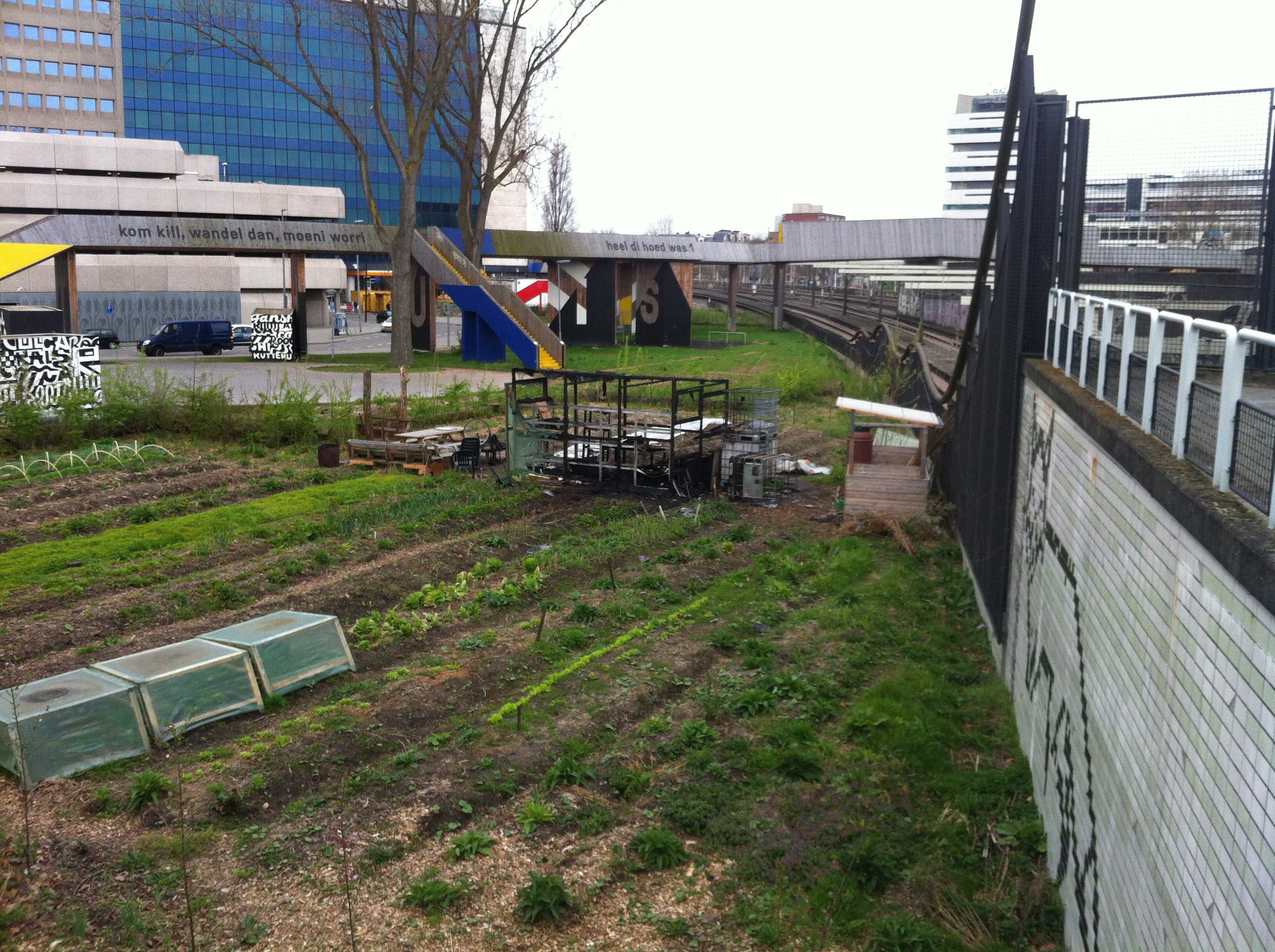 Last night the greenhouse of the Peace Garden burned down.

Someone on facebook told me about it on one of my latest posts about the garden. This morning, around half past nine, i walked up there to check. My first reaction was actually relieve. I had imagined the whole garden burned down. Luckily it was only the greenhouse. Then my reaction was sadness. And then anger. And then sadness once more.

I walked back home to get my iPhone. I did call the two maintainers then and told them both in their voice mail. Then i told the whole group in our whatsapp group. After a few initial reactions i walked back to make some photos to post in the whatsapp group. (I don’t have internet on my iPhone. I can only connect back home with my wifi.) Back home once more there were many reactions in the group. And even more after i posted the photos.

I made some tea and went back with it.

I could see the center of the fire was towards the back of the greenhouse. At the back stood the water tanks, which were melted. The inside of the greenhouse was burned and cracked, the plastic molten away, the iron fences bent and deformed.

Soon other people came by, Jorinde and Andreas. We were all shocked. But also thinking about what might have caused this, what to do next, what sort of greenhouse to make next, what of the chicken run, what of the seedlings we should be sowing again in the next two weeks. Questions tumbling over each other.

John, our homeless person residing in the greenhouse came along. He told us it was another group of people who had done this, while he was away to work. Jealousy.

Murray, Daniel and Julien came along. We cleaned up a little bit.
Then Daniel treated us all to coffee and chocolate milk. And we talked a bit more, sitting on the benches outside the garden.

A week and a half ago i talked with Julien about my desire for someone special in my life. But i also said i didn’t want to date. Dating reminds me of bringing only the best parts of me. There is simply no way i will ever go in Tinder or some dating website and try to find someone there. It was hard to talk about this, to explain this feeling i had. I did say i was feeling happy. Really. Even though my money situation is extremely tight right now. I don’t worry about it. I’m not sure why. I know i should, really. I know a few years back i would be worried sick. But i am not worried right now. I trust myself, in who i am, in my work – this website. I know things could go wrong, but i feel they won’t. I don’t understand this, but this is a very strong feeling.

Only now i slowly begin to realize how upset i am. How angry. Livid. Furious.

So yes, i would love to fall in love. Have a boyfriend. Someone to talk with, sleep with, kiss with, have sex with. Of course. A friend. A true friend. Of course. But he is not around. And i’m not going to let that stop me from living my life. Fight for what i believe is right. Hell no.

The plan is to work tomorrow, Thursday, to get the greenhouse cleared, the ground around it cleared.

And me, i am writing this post Fire now. After i read a bit more in my Gilbert & George books. I will make a post dedicated to them soon. I leave you with one of their works from 1984, Death Hope Life Fear. I do want to get my head clear about their work before though. So yes, reading, learning.

One of their largest and most ambitious pictures, the quadripartite DEATH HOPE LIFE FEAR tackles the central themes of human existence. Its powerful compositions and luminescent colours make this one of the high points of Gilbert & George’s art of the 1980s.

Together, DEATH and LIFE suggest an ongoing cycle of mortality and re-birth, with the figures of the artists simultaneously rising and falling, growing and shrinking. In DEATH, they are embraced by the petals of a rose and a daisy, while in LIFE giant leaves behind their shoulders resemble the wings of angels. In FEAR, the figures of young men are isolated from each other, dispersed at different levels. HOPE, by contrast, presents an image of unity and strength, with the youths arranged into definite groups in front of a landscape reminiscent of the white cliffs of Dover. 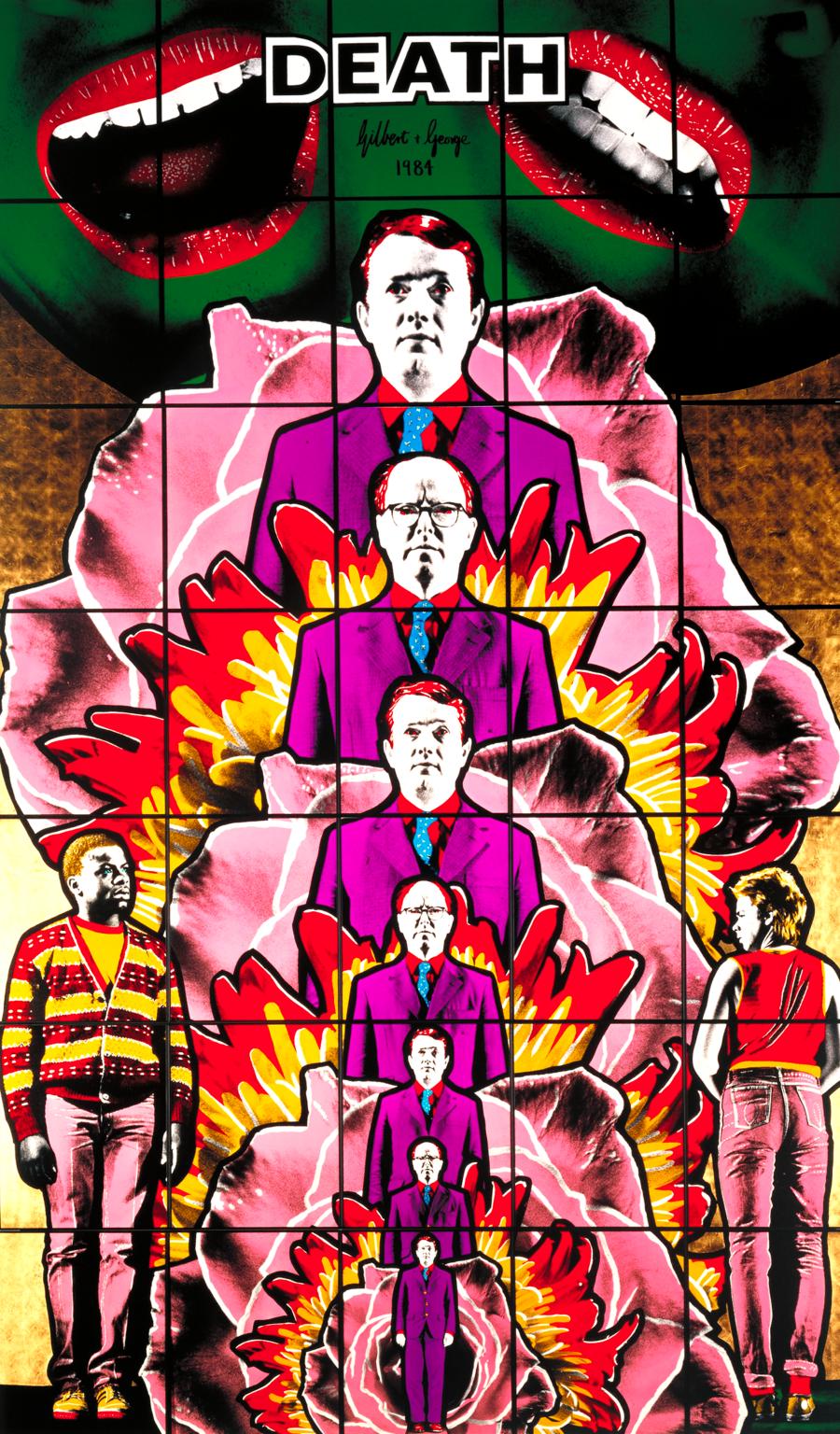 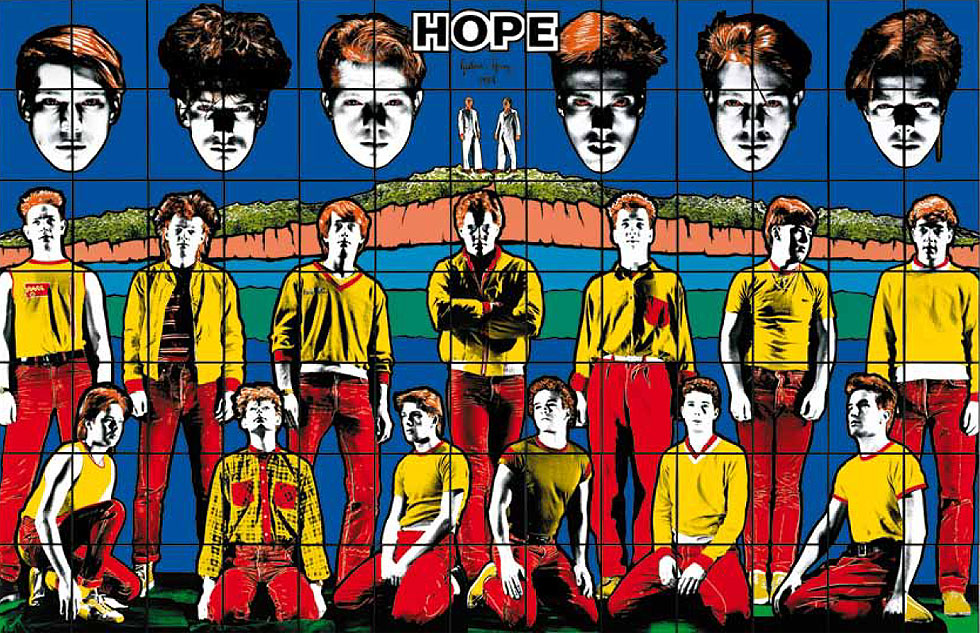 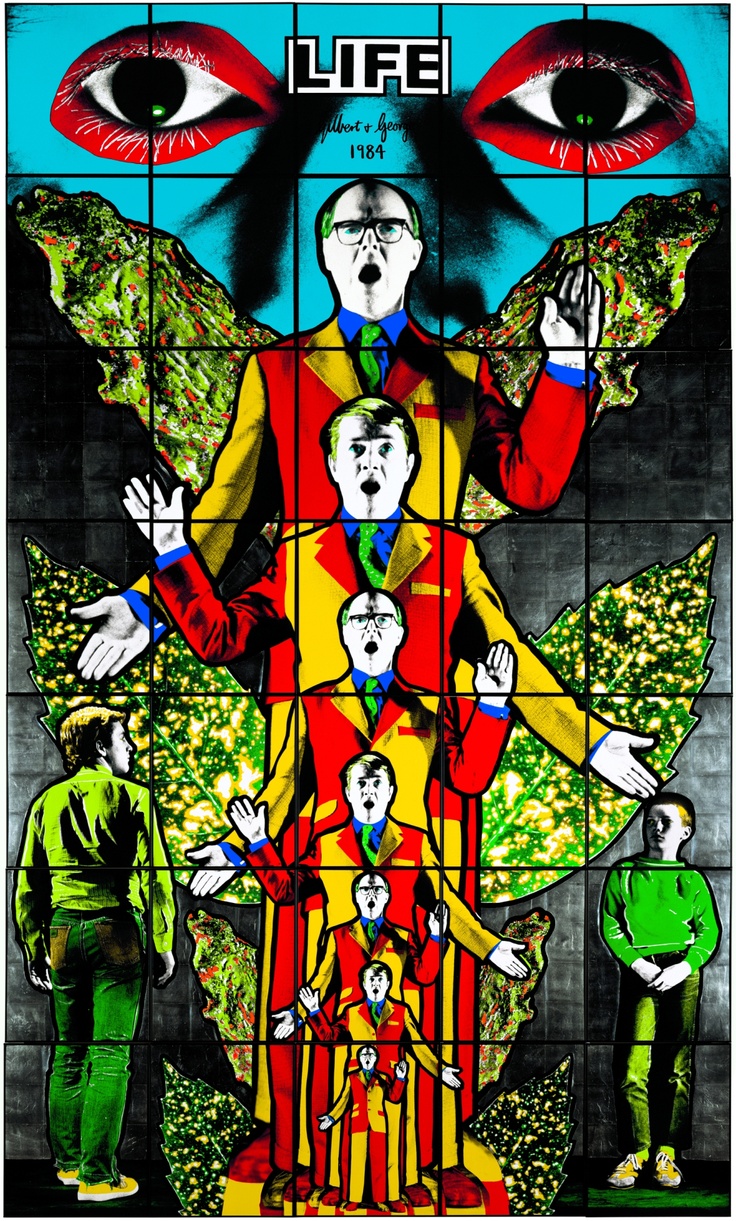 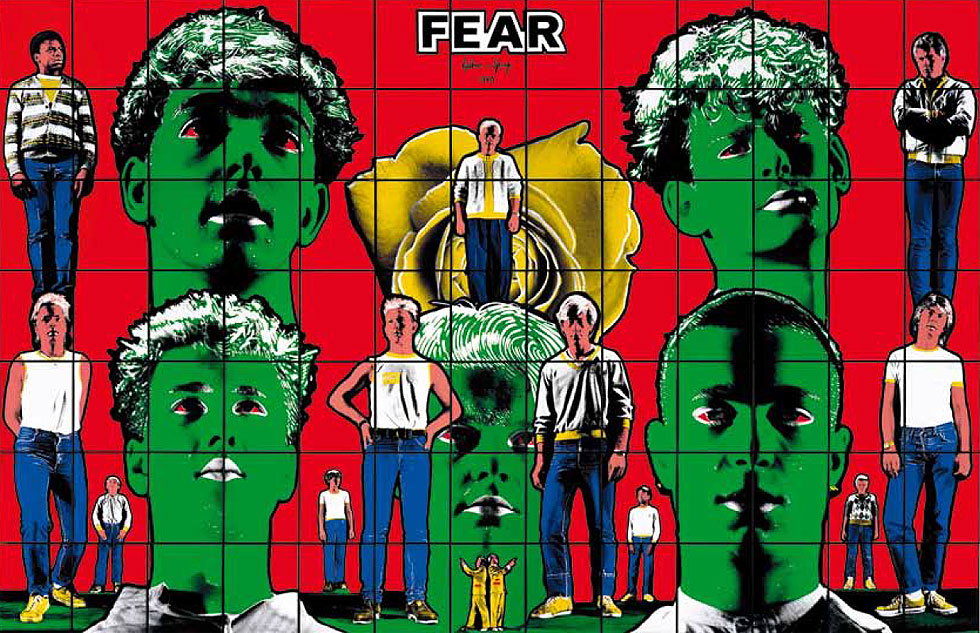