The end of a beautiful dvd collection 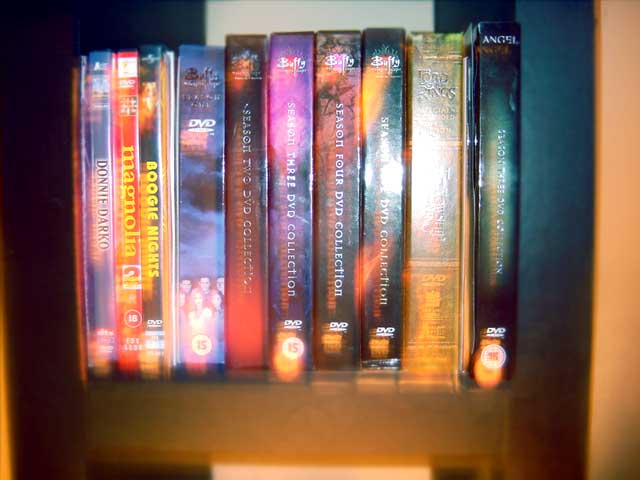 Today i’m writing the post The end of a beautiful dvd collection. 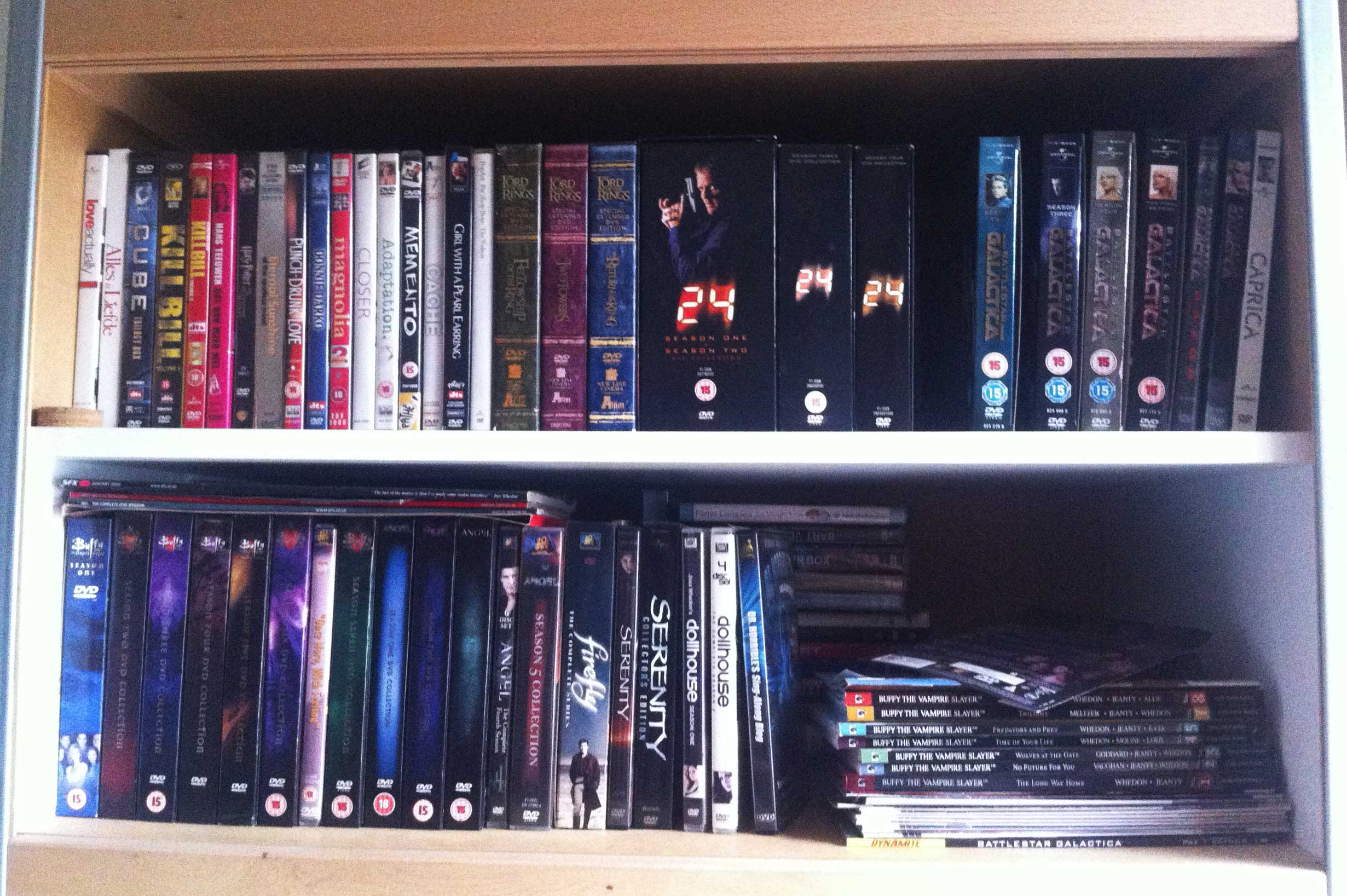 I do think the last dvd i bought was either Dollhouse s2 or Caprica. That must have been the end of 2010. Five years ago. I was downloading already. But yes, i did enjoy having the dvd’s, of special shows i love. I enjoy the packaging, the special features.

My favourite dvd’s still are the extended ones form the Lord of the Rings. The bonus features! The first one, which i already had in 2003, had this special bonus on color correcting, which i loved. I should watch these again soon. Not the movies itself i’m afraid. These were broadcasted on television so many times, i can probably dream these. But yes, the special features!

The movies are mostly from the mid 00’s. Cube i haven’t watched entirely. 24 i liked. True binge watching. I stayed up until around 5am, thinking every time i pressed next that it was going to be the last one, but i couldn’t resist. But 24 did fade away , especially after season 5 or 6.

My Joss Whedon fandom is clearly visible. Buffy, Angel, Serenity, Firefly, Dollhouse, Dr. Horrible’s Sing Along Blog. Most of the first year Buffy comics. I am curious what Whedon will start up next. Even do i did enjoy the two Avenger movies, i’m happy Whedon has stopped working on these and is back to creating his own world once again. I’m curious!

And of course Battlestar Galactica. I missed the first two seasons when it was broadcasted here in the Netherlands. But once i got to see it, i was hooked. I love the story telling, the acting, Edward James Olmos and Mary McDonnell especially. The human Cylons were great, and delivered a special view on humans and how they were perceived by their own makings. Since two days i’m watching the series once again. Friday i watched the mini series. Yesterday, saturday, i watched the first season until episode 8 Litmus. I will watch the rest of season 1 this evening. I’m also reading the reviews on the A.V. Club website. It does give many insights into the episodes which i only half noticed. Or not have noticed at all!

…my interpretation is that it’s the first time the show makes clear to its humans, through a web of subtext and semiotics, that humans will have to be something other than human in order to survive. It’s not clear what, for sure. But this transference of sexual imagery to the machine—and then Kara’s transformation from a ground-crawling human to person that can kind-of-sort-of fly, using her feet and hands — is not an image that is just thrown into the story for funzies. There is something very intense here — a meditation on humanity, a meditation on survival, a reckoning of the very drives that make us people. And an exhortation, perhaps, to walk in someone else’s shoes — or to fly with their wings — or to look through their eyes, after you’ve given them over to the Commander. (from You can’t go home again) 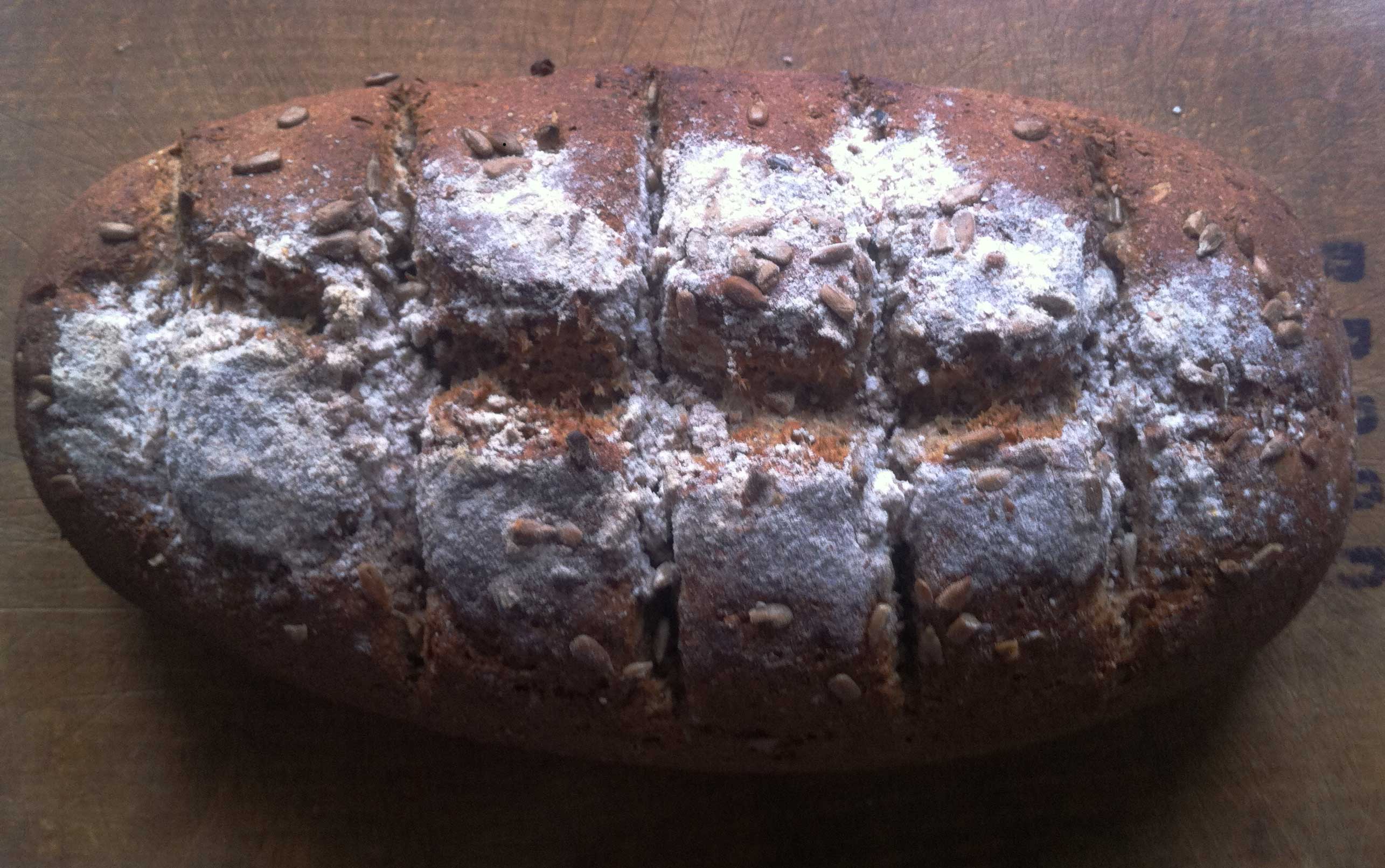 My second bread! With sunflower pits and flaxseeds. I did knead it longer this time, around 10 minutes. The rising went better. I ate the first slices straight after it got out of the oven. I had two slices with butter, and two with tuna salad i made half an hour before, with self made mayonaise. Gorgeous!