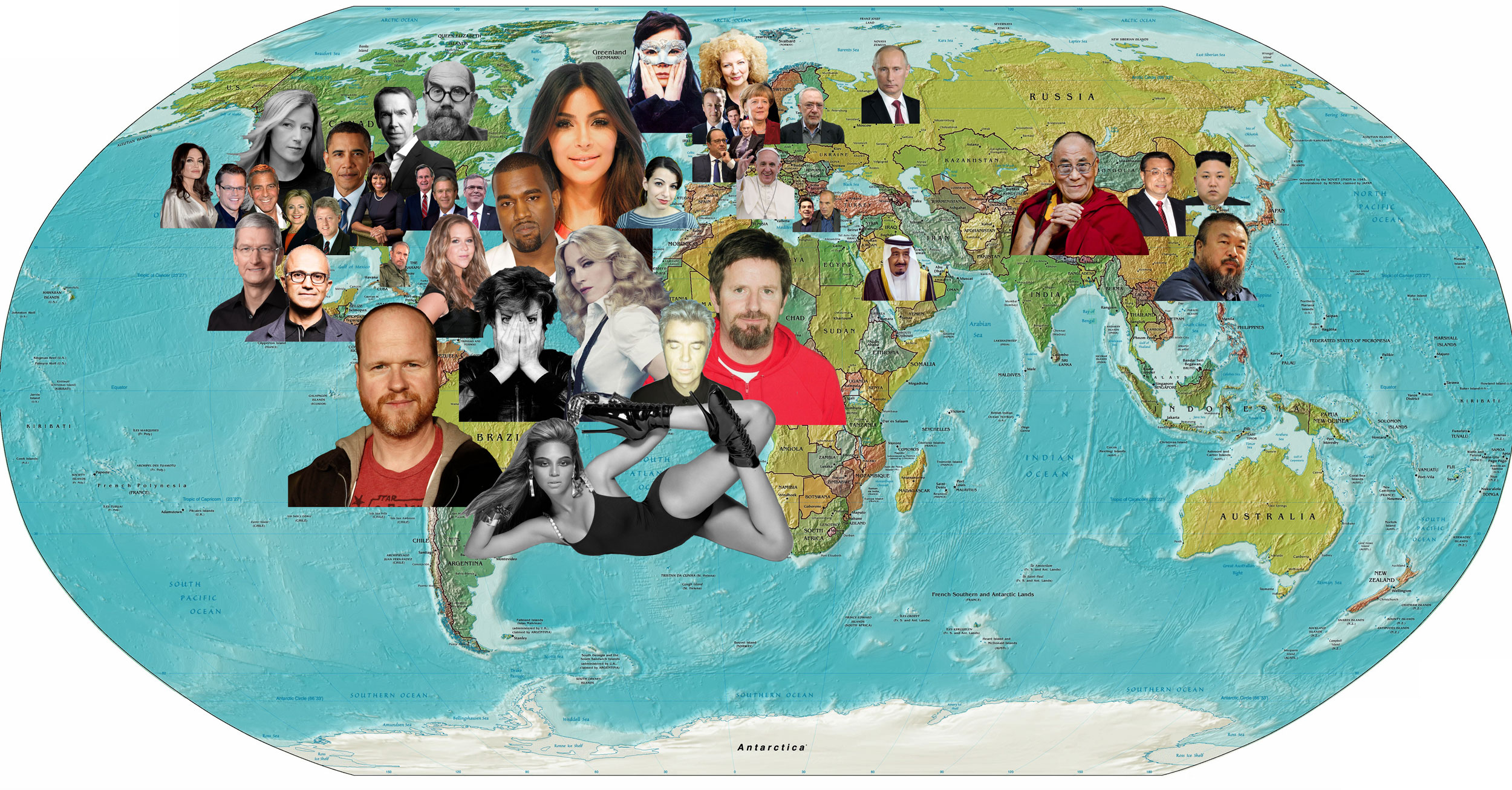 This map has been on my mind, the whole evening, night and day. I still miss some people. Actually, the most important people!

Beyoncé
She is fierce. Definitely. She also seems to be a hardworking dedicated person. I love Crazy in love. I actually made a present out of it. Just the text. She looks out of this world. She actually does seem to have it all. The career, the love, the child.

I remember reading about a meeting with Whitney Houston, who told them to, stay together. That didn’t happen. They might still be friends of course, but their paths in their careers have split. I don’t know why Whitney said this to them, how she meant it. But i did spend some time thinking about this.

I do hope Beyoncé keeps it going. She is the type of woman i could become jealous of! Well, not right now, but i could have in the past. Fortunately for me she is a bit outside of my main interests, so it never happened.

Joss Whedon
If i would decide the rating on my list of heroes with only my mind, Joss Whedon would be number one. I remember seeing the movie Buffy the Vampire Slayer on the Rotterdam Filmfestival, probably in 1993. I liked it, as a lighthearted inbetween movie.

And then Buffy happened. I fell in love with the series. It was on a commercial net in the Netherlands. It was just wonderful. I also watched Angel. Not as good, but still fun with some great episodes. Firefly. Damn. I watched it with these 300 MB files, tiny. I still remember putting my couch in front of my computer and just feeling lost in the verse. It is still my favourite show. Dollhouse i sort of liked. Not the serial bits to be honest, but the part where it jumped into the future was a great twist. Dr. Horrible’s Sing-Along Blog i loved! As i did Cabin in the Woods. Much ado about nothing was a grat watch as well. Seeing all my fave actors in the house designed by Joss Whedon’s wife Kai Cole.

Then Joss Whedon exploded on the world. Whoah! Kaboom! The Avengers. I’m not a big comic book fan, but i did go to the cinema for the first Avengers movie. I did truly enjoy it.

I am curious about Whedon’s next steps. I know he has quit his Twitter account. He is taking some time of. I’m quietly waiting for it. Salute!

“You have, which is a rare thing, that ability and the responsibility to listen to the dissent in yourself, to at least give it the floor, because it is the key — not only to consciousness, but to real growth. To accept duality is to earn identity. And identity is something that you are constantly earning. It is not just who you are. It is a process that you must be active in.”
“So here’s the thing about changing the world. It turns out that’s not even the question, because you don’t have a choice. You are going to change the world, because that is actually what the world is. You do not pass through this life, it passes through you. You experience it, you interpret it, you act, and then it is different. That happens constantly. You are changing the world. You always have been, and now, it becomes real on a level that it hasn’t been before. And that’s why I’ve been talking only about you and the tension within you, because you are — not in a clichéd sense, but in a weirdly literal sense — the future.”

Green Gartside
I can’t resist. Joss Whedon should be my number 1! But he is not. Green Gartside is. And this site is about me, my choices. It was a bit of torture to try and find a decent picture of Green. With the right size. I think i managed. A bit. It’s big enough anyway.

There is Green’s acceptance speech for a honorary Doctorate at Goldsmiths in February 2015.

“I know of course that much of the work we all do is at times solitary and perhaps essentially so but there is something almost perverse in reading about the contingent, collective, contextual connectedness of all things and the social interrelatedness of power, knowledge and truth – when you are completely alone. And it will drive you mad.”

Ooh, in case you do not know, Green Gartside is the core member of Scritti Politti. Scritti has silences lasting longer than a popgroups entire career. The current one is a bit less silent than the previous ones. There was a best of Scritti collection in 2011, with two new songs. Some cooperations too. But the last album came out in 2006, White Bread Black Beer, nine years ago.

I am curious which path Green will take next. My soft spot is still with David Gamson‘s music. The man with a remarkable short wikipedia page. 🙂 But i don’t know anything about Scritti’s future, sorry to say.

Another youtube playlist, from Cupid & Psyche 85 days. This time there are clips visible whenever possible.

Pfff, man this page is hard work. I had real trouble with Green Gartside. There isn’t that much good material of him out there. I was happy with the acceptance speech! There are many interviews of course. But nothing that really got to me.

This is the third day i’m updating the world map. I’m sure there will be other days following, but from now on with longer times inbetween. Names did pop up in my mind, but for this update i wanted to limit the persons added. It was a bit of a tunnel i had to go through. I’m like, a bit confused now.

I’m gonna drink a cider and see if there is anything on tv. Hopefully i will sleep a bit more tonight than last night. Or the night before that. Or before that.

This moment it’s hard being Ellen, for sure.