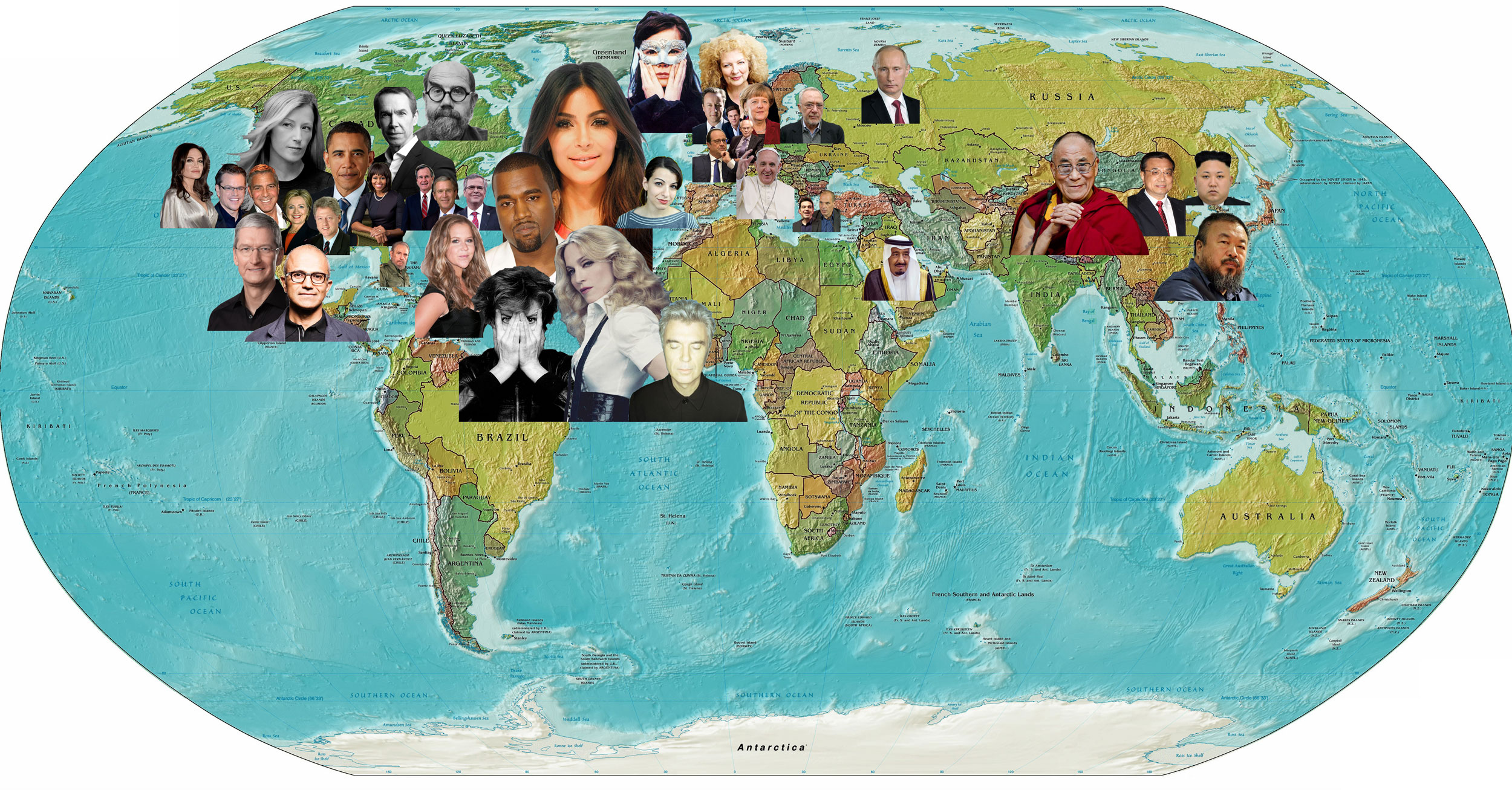 This map is on my mind the whole day. So i figured, better get some more people on it.

Starting with people more in line with me. People i really admire, or am baffled about. Artists.

Jeff Koons. I’ve known his work since the late 80s. Part of my end thesis for art school was about him. I saw the big puppy made with all flowers in Germany in the early 90s. The one time i went to the Documenta in Kassel. I do really love the look of the balloon dogs. He is still weird.

I’ve seen documentaries by and about Ai Weiwei. Deep respect for this man living in a difficult country for an artist, who keeps on fighting not simply against every rule taking out, but for his believe in living true. Salute!

“One has to believe in what one is doing, one has to commit oneself inwardly, in order to do painting. Once obsessed, one ultimately carries it to the point of believing that one might change human beings through painting. But if one lacks this passionate commitment, there is nothing left to do. Then it is best to leave it alone. For basically painting is idiocy.”

Cindy Sherman. I’ve known her work from when she did her film stills in the 80s.It does bring back memories of when i was reading art critic articles. Which is like 20 25 years ago. I still do like her work. And what is that? She was David Byrne’s girlfriend? For some reason i always thought David Byrne was married. I’m like.. a bit stunned. He is back on my list of eligible man! 🙂

Chuck Close. Love his work. Saw an exhibit in London ten years ago or something. Wonderful.

Even though i left this world behind a long time ago, it is still close to my heart. There are many more artists, but i have also not paid much attention to all the artists coming up. Ai Weiwei is the only new one on my list.

David Bowie. I mean.. duh. I’m not an all out fan like some people i know. Who have had a crush on him since their teens. But i do love his music, his performances. His style.

“What I’ve Learned, I’m in awe of the universe, but I don’t necessarily believe there’s an intelligence or agent behind it. I do have a passion for the visual in religious rituals, though, even though they may be completely empty and bereft of substance. The incense is powerful and provocative, whether Buddhist or Catholic.

Madonna. Where to start. The hits i still enjoy: Holiday, Like a virgin, Material girl, Open your heart, True blue, Like a prayer, Express yourself, Cherish, Vogue, Ray of light. I don’t really get into her latest stuff. With which i mean the stuff she made the last 15 years or so. 🙂 Quite the lady.

David Byrne. His name already was mentioned in this post. It’s mainly his Talking Heads days i know about. I did visit his website like, 10 years ago? Listened to a stream of music through it. I don’t even remember how. It was before Spotify. Could be just a mp3 stream. Anyways. He’s cool.

This is it for now. Enjoy your day!