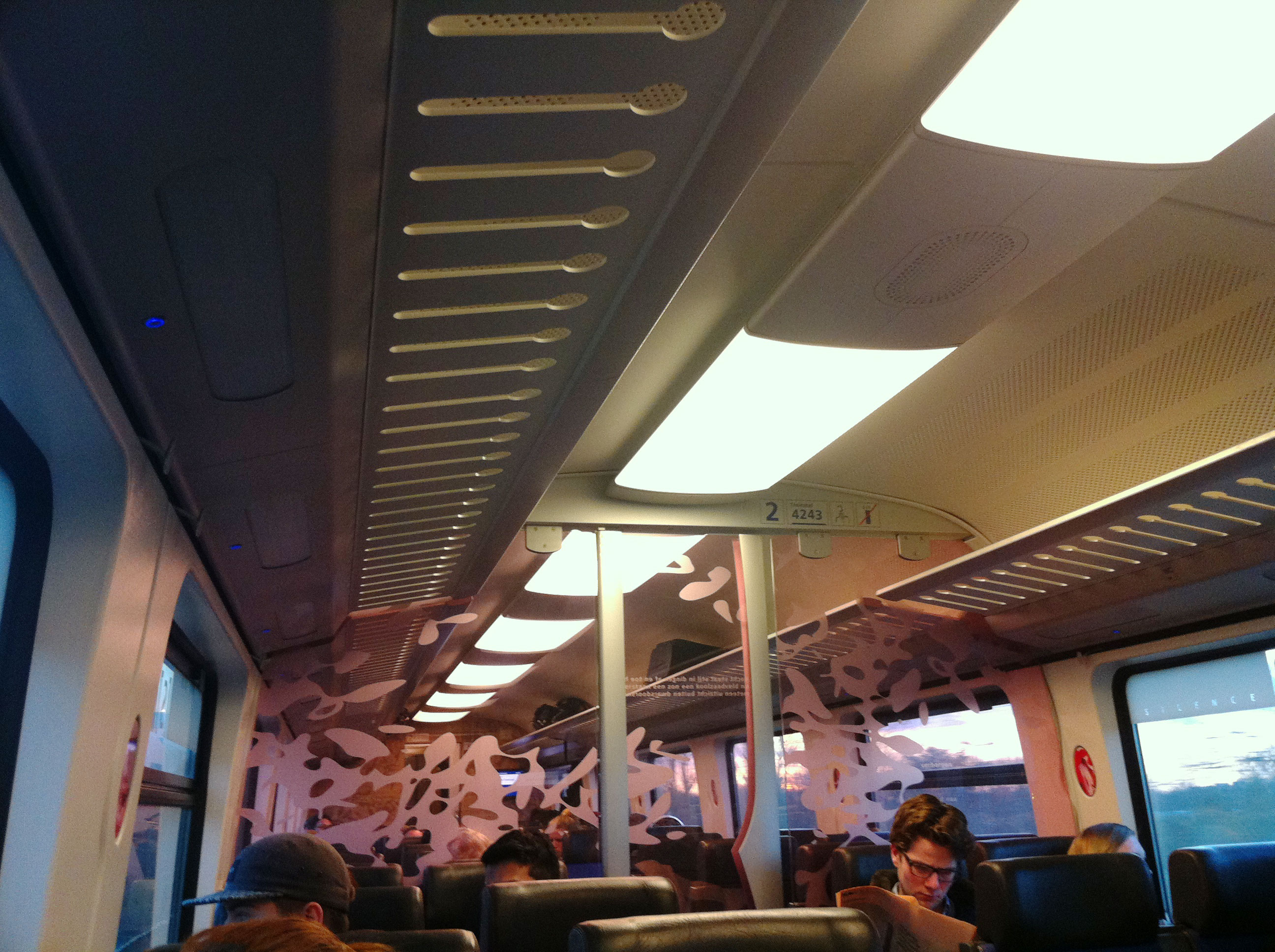 Today, Easter Monday, i visited my mother and her husband. I went with the train to Amersfoort, a one hour trip from Rotterdam. I listened to my favourite tracks.

The Netherlands is this very specific country where almost everything is defined and delineated. Even the country side in the west has the lines of the water around it. I do love it, in its way.

Steely Dan – Deacon Blues Lyrics
This is the day of the expanding man
That shape is my shade
There where I used to stand
It seems like only yesterday
I gazed through the glass
At ramblers, wild gamblers
That’s all in the past

END_OF_DOCUMENT_TOKEN_TO_BE_REPLACED

Yesterday evening i went to the Matthäus-Passion in the Doelen in Rotterdam.

A day my mind simply races forward and nothing comes out of my hands. I do need to stop doing that!

I have so many things i could be doing right now. And i don’t do any of it.

I have a cat sitting beside me who wants to be petted.

I’ll just go and make a cup of tea and have a fruit cookie. I’ll pet the cat, watch a bit more tv and then go to bed.

Nothing of this shit tomorrow though! Work! 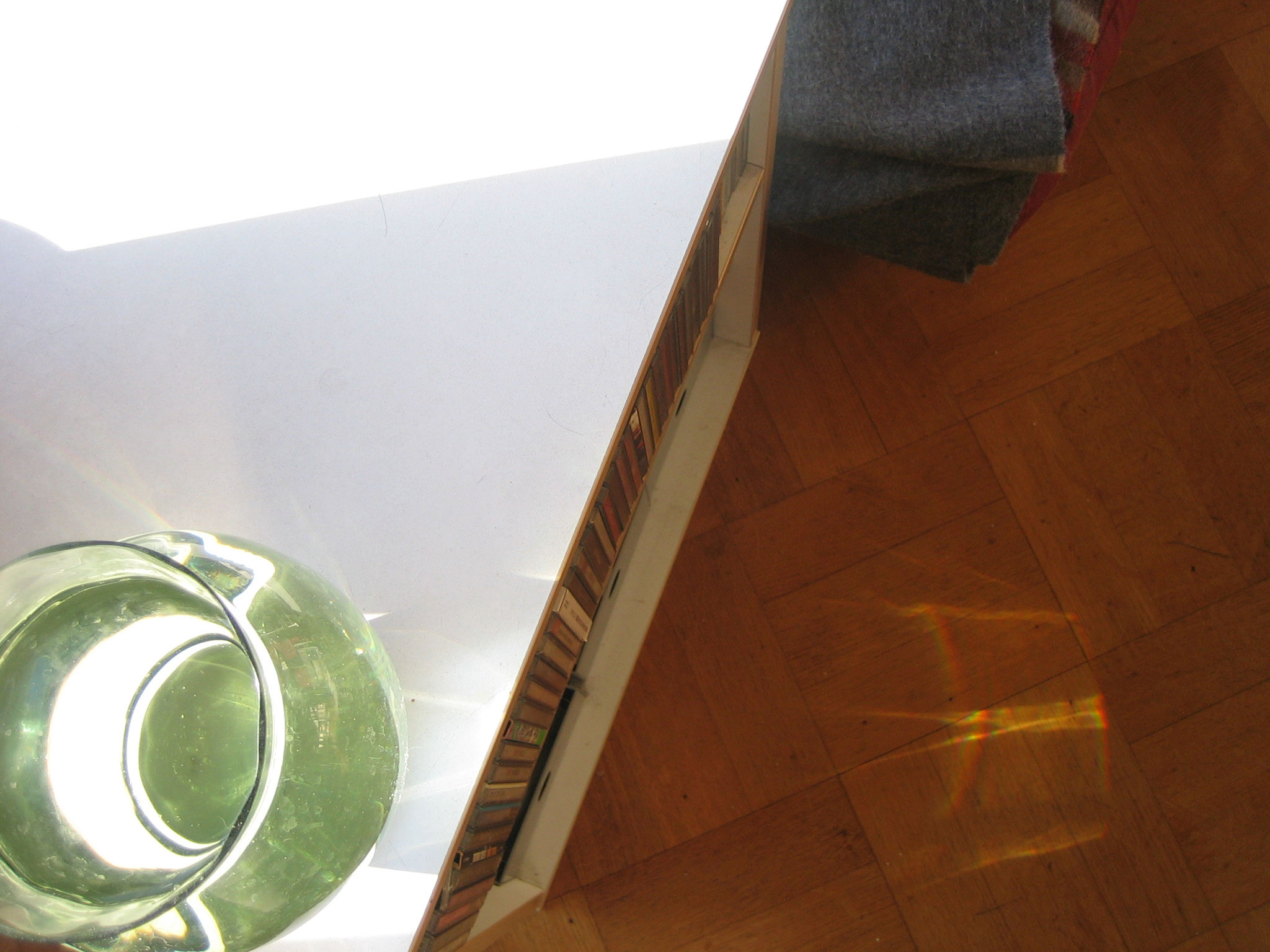 I stayed at home today. Dreaming away. Halfway the sun came out. I was thinking about what to make for tomorrow, i wasn’t sure. Then i saw the sun and the light reflecting on the water shine on the wall. I had to charge up the battery in my camera for a bit. Then i made some pictures. It reminded me of the ones i made in art school. Photographing the flat surfaces with little details popping in at the edge. Apart from the top picture, which is simply one i really like.

So well, this is it. I had loads more, but these are the ones i picked. Enjoy!

END_OF_DOCUMENT_TOKEN_TO_BE_REPLACED

Yesterday, Monday, i spend around 5 hours writing the previous post ‘Sex’. Afterwards i felt very tired. I got the idea in the morning, and for some reason i liked it. I still do. I don’t have much trouble talking about these so-called private things. But writing and getting the response to a post like that takes a lot of energy. So today it’s gonna be a bit of a nothing post.

Today, Wednesday, i will cast my vote for the provincial election. And this evening there is a VvE (Homeowners Association) meeting in my house, so i gotta clean up a bit and get some coffee and cookies.

Tuesday was a lovely day. I went to the market with no coat on. All around were people sitting on the stairs and chatting and enjoying the sunshine. Lovely. I might do a walk today. Depends on the weather. I still want to walk around the island below the Van Brienenoordbrug. Take the tram there and walk around and then see if i walk back or take the tram back. I’ll decide tomorrow!

I’m gonna watch a bit of tv now and go to bed early.

Exactly that, a busy week.

Finding myself taking things a bit slower than i would have liked. But hey, that’s just how it goes.

Last week i had an interview, which i recorded. I’m still in the process of translating and writing the article itself. I do enjoy it, but it’s moving on a bit slow.

Last week, after the interview, my initial thought was getting straight at it, but instead i made a long walk in the sunshine. I got really tired. That tiredness didn’t move away the next days. Today i still feel it.

I will start cooking soon. Two sausages. Simmer them in red wine with shallots, mushrooms and bacon. And a mash with parsnip and potato.

But yeah, it was a busy week. Even though i’m moving on slower than i wish, i’m taking steps. They might be tiny, but they are in the right direction.

Gonna go cooking now. I do hope you enjoy your monday.

Made my breakfast. Two slices of bread. An omelet with cheese and parma ham. I turned on the television and zapped around a bit. Watched some classical music, saturday best bites, the news, a bit of Buitenhof. I wasn’t that into the people being interviewed, so i turned the tv of.

Listened to some music. My own MIX tapes on Spotify.

I started to think a bit about the post i knew i had to make today. Maybe about my hair washing ritual. Or i could go for a walk? I had no idea.

I washed my hair. I washed me. When i got out of the shower, i used some of the homemade body butter. For my feet, legs and arms. I turned on the television, watched some skating. More thought about what i should write crept up. Something about an old present. About the book i was reading? About my first classical love, Rudolf Escher?

I heated up the risotto i made yesterday. I watched the classical music show from Paul Witteman. After that i watched the vtwonen get-your-home-changed-for-you show. I made some chocolate milk for myself. Maybe Joss Whedon? My eyes went to my bookcase. Cooking books! Or sci-fi? Or the design work on this website?

I had to make a decision. Even though i do have until six tomorrow morning. I wasn’t gonna spend the entire night writing or making something. No idea was sticking. I danced a little. With my headphones on. Not really going out of my mind.

Watched a little Miss Congeniality. Which i have seen twice before, maybe even three times. Or four! Maybe i should write about today. About this lazy sunday. About the thoughts i had about what to write.

The idea stuck. And Homeland started. I got me some red wine, left over from yesterday. I don’t download anymore since tvtorrents.com went down. But Homeland is on Dutch television, so i’m following it. Not sure what i’m gonna do when Game of Thrones and Mad Men start. We’ll see.

And after Homeland had stopped, i poured the last red wine in my glass. Sat behind my computer and started writing. This piece. About today. I made an image first, with a gradient from orange to magenta/red.

A new month has started. My fourth week on this website. Time flies.