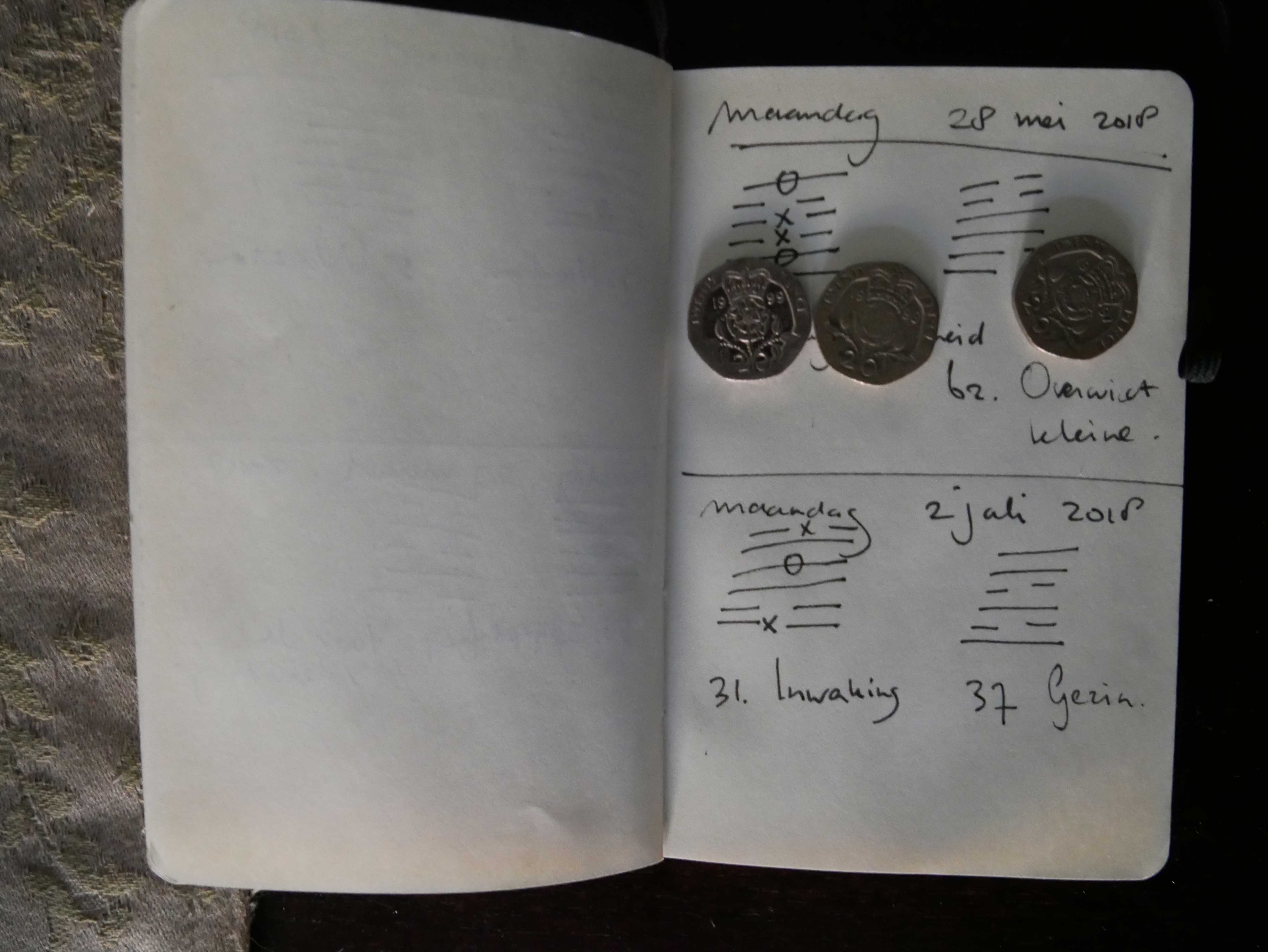 Six at the beginning means:
The influence shows itself in the big toe.

A movement, before it is actually carried out, shows itself first in the toes. The idea of an influence is already present, but is not immediately apparent to others. As long as the intention has no visible effect, it is of no importance to the outside world and leads neither to good nor to evil.

° Nine in the fourth place means:
Perseverance brings good fortune.
Remorse disappears.
If a man is agitated in mind,
And his thoughts go hither and thither,
Only those friends
On whom he fixes his conscious thoughts
Will follow.

Here the place of the heart is reached. The impulse that springs from this source is the most important of all. It is of particular concern that this influence be constant and good; then, in spite of the danger arising from the great susceptibility of the human heart, there will be no cause for remorse. When the quiet power of a man’s own character is at work, the effects produced are right. All those who are receptive to the vibrations of such a spirit will then be influenced. Influence over others should not express itself as a conscious and willed effort to manipulate them. Through practicing such conscious incitement, one becomes wrought up and is exhausted by the eternal stress and strain. Moreover, the effects produced are then limited to those on whom one’s thoughts are consciously fixed.

Six at the top means:
The influence shows itself in the jaws, cheeks, and tongue.

The most superficial way of trying to influence others is through talk that has nothing real behind it. The influence produced by such mere tongue wagging must necessarily remain insignificant. Hence no indication is added regarding good or bad fortune.

The hexagram represents the laws obtaining within the family. The strong line at the top represents the father, the lowest the son. The strong line in the fifth place represents the husband, the yielding second line the wife. On the other hand, the tow strong lines in the fifth and the third place represent two brothers, and the two weak lines correlated with them in the fourth and the second place stand for their respective wives. Thus all the connections and relationships within the family find their appropriate expression. Each individual line has the character according with its place. The fact that a strong line occupies the sixth place – where a weak line might be expected – indicates very clearly the strong leadership that must come from the head of the family. The line is to be considered here not in its quality as the sixth but in its quality as the top line. THE FAMILY shows the laws operative within the household that, transferred to outside life, keep the state and the world in order. The influence that goes out from within the family is represented by the symbol of the wind created by fire.

The foundation of the family is the relationship between husband and wife. The tie that hold the family together lies in the loyalty and perseverance of the wife. Her place is within (second line), while that of the husband is without (fifth line). It is in accord with the great laws of nature that husband and wife take their proper places. Within the family a strong authority is needed; this is represented by the parents. If the father is really a father and the son a son, if the elder brother fulfills his position, and the younger fulfills his, if the husband is really a husband and the wife a wife, then the family is in order. When the family is in order, all the social relationships of mankind will be in order.
Three of the five social relationships are to be found within the family-that between father and son, which is the relation of love, that between the husband and wife, which is the relation of chaste conduct, and that between elder and younger brother, which is the relation of correctness. The loving reverence of the son is then carried over to the prince in the form of faithfulness to duty; the affection and correctness of behavior existing between the two brothers are extended to a friend in the form of loyalty, and to a person of superior rank in the form of deference. The family is society in the embryo; it is the native soil on which performance of moral duty is made early through natural affection, so that within a small circle a basis of moral practice is created, and this is later widened to include human relationships in general.