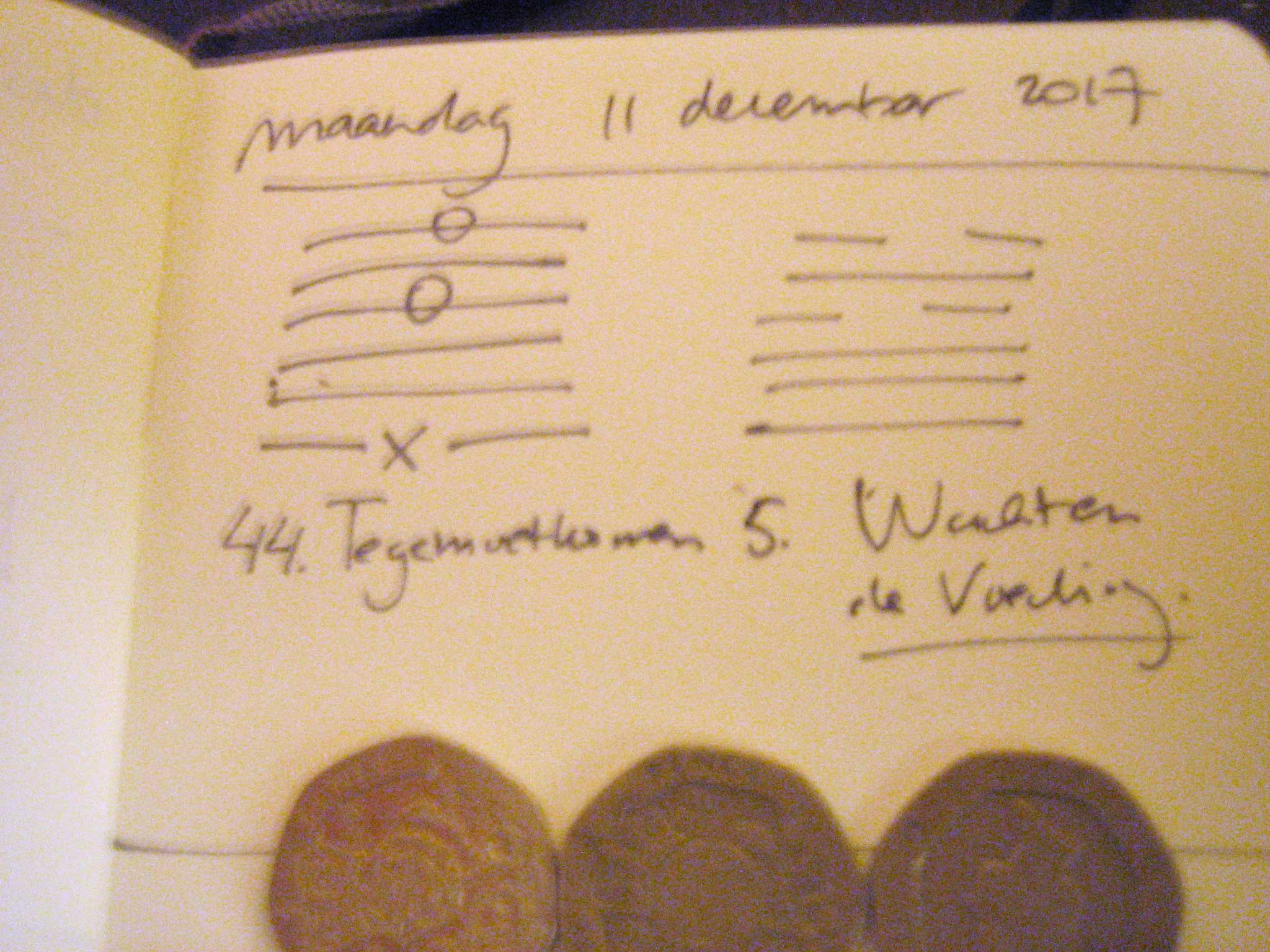 above CH’IEN THE CREATIVE, HEAVEN
below SUN THE GENTLE, WIND

This hexagram indicates a situation in which the principle of darkness, after having been eliminated, furtively and unexpectedly obtrudes again from within and below. Of its own accord the female principle comes to meet the male. It is an unfavorable and dangerous situation, and we must understand and promptly prevent the possible consequences.
The hexagram is linked with the fifth month [June-July], because at the summer solstice the principle of darkness gradually becomes ascendant again.

COMING TO MEET. The maiden is powerful.
One should not marry such a maiden.

The rise of the inferior element is pictured here in the image of a bold girl who lightly surrenders herself and thus seizes power. This would not be possible if the strong and light-giving element had not in turn come halfway. The inferior thing seems so harmless and inviting that a man delights in it; it looks so small and weak that he imagines he may dally with it and come to no harm.
The inferior man rises only because the superior man does not regard him as dangerous and so lends him power. If he were resisted from the fist, he could never gain influence.
The time of COMING TO MEET is important in still another way. Although as a general rule the weak should not come to meet the strong, there are times when this has great significance. When heaven and earth come to meet each other, all creatures prosper; when a prince and his official come to meet each other, the world is put in order. It is necessary for elements predestined to be joined and mutually dependent to come to meet one another halfway. But the coming together must be free of dishonest ulterior motives, otherwise harm will result.

Under heaven, wind:
The image of COMING TO MEET.
Thus does the prince act when disseminating his commands
And proclaiming them to the four quarters of heaven.

The situation here resembles that in hexagram 20, Kuan, CONTEMPLATION ( VIEW). In the latter the wind blows over the earth, here it blows under heaven; in both cases it goes everywhere. There the wind is on the earth and symbolizes the ruler taking note of the conditions in his kingdom; here the wind blows from above and symbolizes the influence exercised by the ruler through his commands. Heaven is far from the things of earth, but it sets them in motion by means of the wind. The ruler is far form his people, but he sets them in motion by means of his commands and decrees.

Six at the beginning means:
It must be checked with a brake of bronze.
Perseverance brings good fortune.
If one lets it take its course, one experiences misfortune.
Even a lean pig has it in him to rage around.

If an inferior element has wormed its way in, it must be energetically checked at once. By consistently checking it, bad effects can be avoided. If it is allowed to take its course, misfortune is bound to result; the insignificance of that which creeps in should not be a temptation to underrate it. A pig that is still young and lean cannot rage around much, but after it has eaten its fill and become strong, its true nature comes out if it has not previously been curbed.

Nine in the fourth place means:
No fish in the tank.
This leads to misfortune.

Insignificant people must be tolerated in order to keep them well disposed. Then we can make use of them if we should need them. If we become alienated from them and do not meet them halfway, they turn their backs on us and are not at our disposal when we need them. But this is our own fault.

Nine at the top means:
He comes to meet with his horns.
Humiliation. No blame.

When a man has withdrawn from the world, its tumult often becomes unbearable to him. There are many people who in a noble pride hold themselves aloof from all that is low and rebuff it brusquely wherever it comes to meet them. Such persons are reproached for being proud and distant, but since active duties no longer hold them to the world, this does not greatly matter. They know how to bear the dislike of the masses with composure.