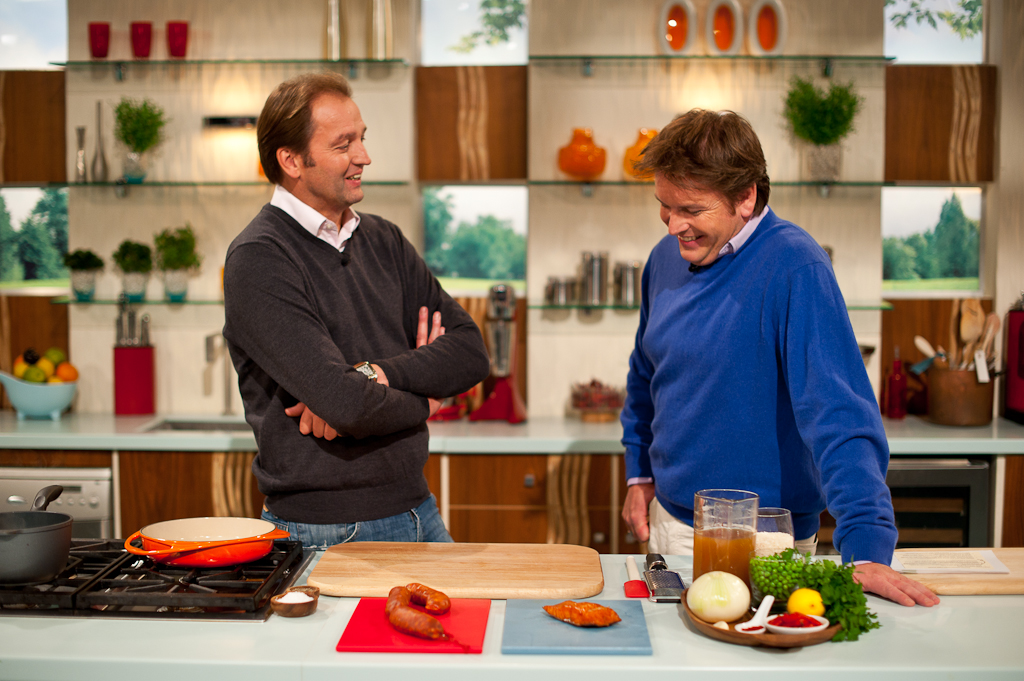 Saturday mornings are special. The first part of the weekend, nothing urgent that needs doing – most of the time anyway. I usually sleep in a little longer, boil or bake an egg. And watch television. Some repeats, and, at eleven (here in the Netherlands – one hour later than in the UK) Saturday Kitchen Live!

The main presenter, for ten years, was James Martin. In February 2016 Martin announced he would leave the show a couple of months later. Since he left several chefs have presented the show. I enjoy Angela Hartnett the most.

The show follows a specific formula. Two chefs cook one of their dishes. A celebrity chef is a special guest. The presenter cooks a dish for him/her while (s)he talks with hime/her. In between the dishes several older items are shown. The kitchen is cleaned up in the meantime. The Omelette Challenge is a race between the two chefs. Who will cook the fastest omelette. The record holder is Theo Randall, with a time of 14.76 seconds, set on 2 May 2015.

The special guest has an food heaven dish and a food hell dish. People calling in with a question and the two chefs can pick either. The show ends with one of the dishes being cooked by the presenter and the two chefs and eaten by the guest.

I am not watching this show each week anymore. But a few years ago i did. And these days when i do watch it, i do enjoy it. So this is for an old favorite.

PS. This post came about because of the food heaven and food hell choice. I like the option in the show, yes. But the words used, heaven and hell, are lessened in their meaning in this use. They are simple advertisement talk. I do feel uncertain about this. My mind is getting a bit sharper, and i do find myself listening with a clearer ear. The proper meaning of these words heaven and hell has got nothing to do with food. But i do think this needs its own post, or rather series of posts. And this is not the single use of a word out of its proper meaning. Hell no, advertisement is completely full of this. So i leave this comment as a postscript. To be getting back to later.

Categorised in: Books, films and TV, Food
Leave your thoughts