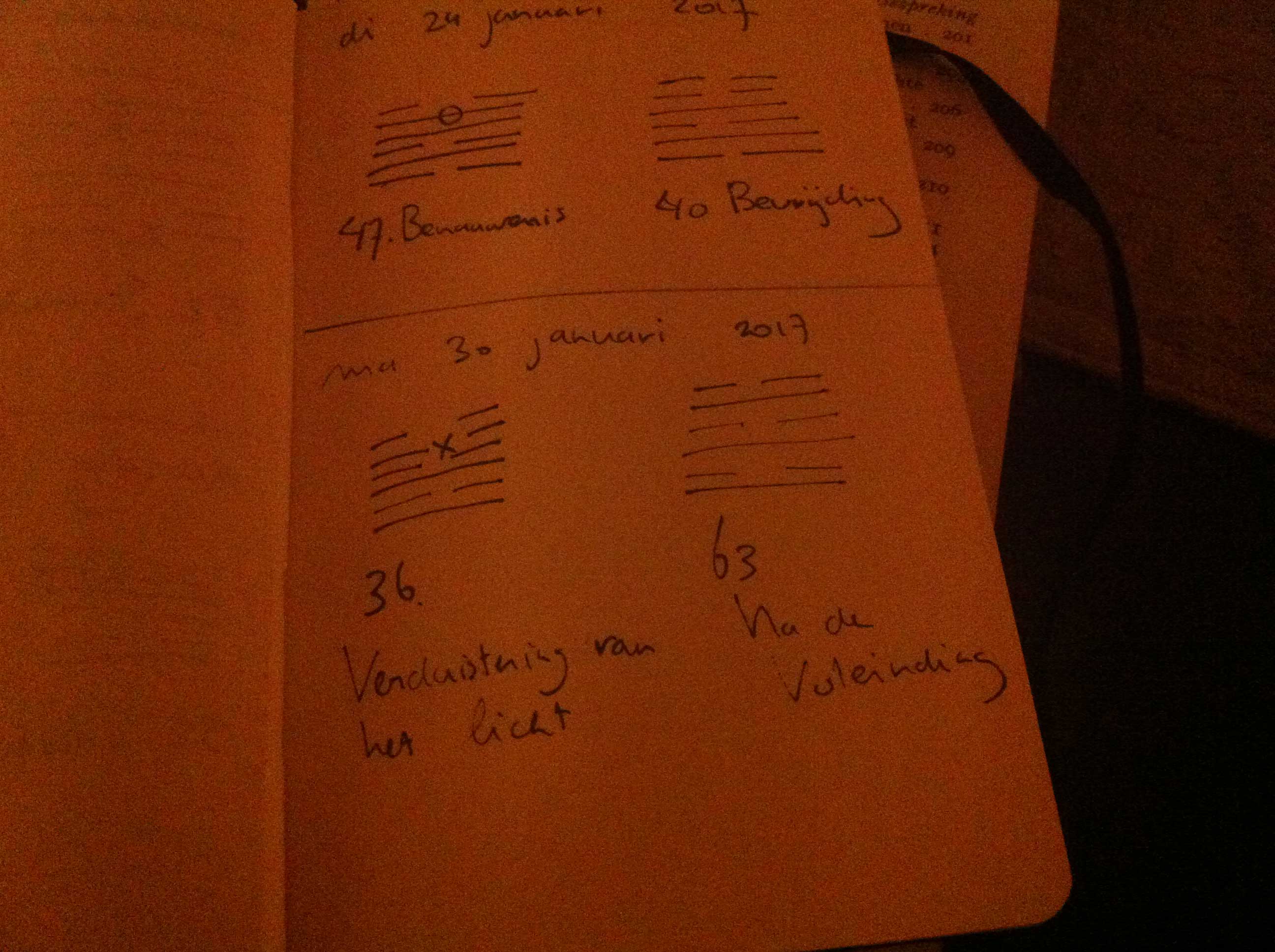 Today i have worked on my new videoclip. In which i sing a song. On my own. First i thought i would finish it in one day. But no. Copying took a long time. Filming did too. And in the back of my mind i knew one day was really short. So i have given myself another day to work on it. And make some more clips.

above K’UN THE RECEPTIVE, EARTH
below LI THE CLINGING, FIRE

Here the sun has sunk under the earth and is therefore darkened. The name of the hexagram means literally “wounding of the bright”; hence the individual lines contain frequent references to wounding. The situation is the exact opposite of that in the foregoing hexagram. In the latter a wise man at the head of affairs has able helpers, and in company with them makes progress; here a man of dark nature is in a position of authority and brings harm to the wise and able man.

DARKENING OF THE LIGHT. In adversity
It furthers one to be persevering.

One must not unresistingly let himself be swept along by unfavorable circumstances, nor permit his steadfastness to be shaken. He can avoid this by maintaining his inner light, while remaining outwardly yielding and tractable. With this attitude he can overcome even the greatest adversities. In some situations indeed a man must hide his light, in order to make his will prevail inspite of difficulties in his immediate environment. Perseverance must dwell in inmost consciousness and should not be discernible from without. Only thus is a man able to maintain his will in the face of difficulties.

The light has sunk into the earth:
The image of DARKENING OF THE LIGHT.
Thus does the superior man live with the great mass:
He veils his light, yet still shines.

In a time of darkness it is essential to be cautious and reserved. One should not needlessly awaken overwhelming enmity by inconsiderate behavior. In such times one ought not to fall in with the practices of others; neither should one drag them censoriously into the light. In social intercourse one should not try to be all-knowing. One should let many things pass, without being duped.

° Six in the fifth place means:
Darkening of the light as with Prince Chi.
Perseverance furthers.

Prince Chi lived at the court of the evil tyrant Chou Hsin, who, although not mentioned by name, furnished the historical example on which this whole situation is based. Prince Chi was a relative of the tyrant and could not withdraw from the court; therefore he concealed his true sentiments and feigned insanity. Although he was held a slave, he did not allow external misery to deflect him from his convictions. This provides a teaching for those who cannot leave their posts in times of darkness. In order to escape danger, they need invincible perseverance of spirit and redoubled caution in their dealings with the world.

This hexagram is the evolution of T’ai PEACE. The transition from confusion to order is completed, and everything is in its proper place even in particulars. The strong lines are in the strong places, the weak lines in the weak places. This is a very favorable outlook, yet it gives reason for thought. For it is just when perfect equilibrium has been reached that any movement may cause order to revert to disorder. The one strong line that has moved to the top, thus effecting complete order in details, is followed by the other lines. Each moving according to its nature, and thus suddenly there arises again the hexagram P’i, STANDSTILL. Hence the present hexagram indicates the conditions of a time of climax, which necessitate the utmost caution.