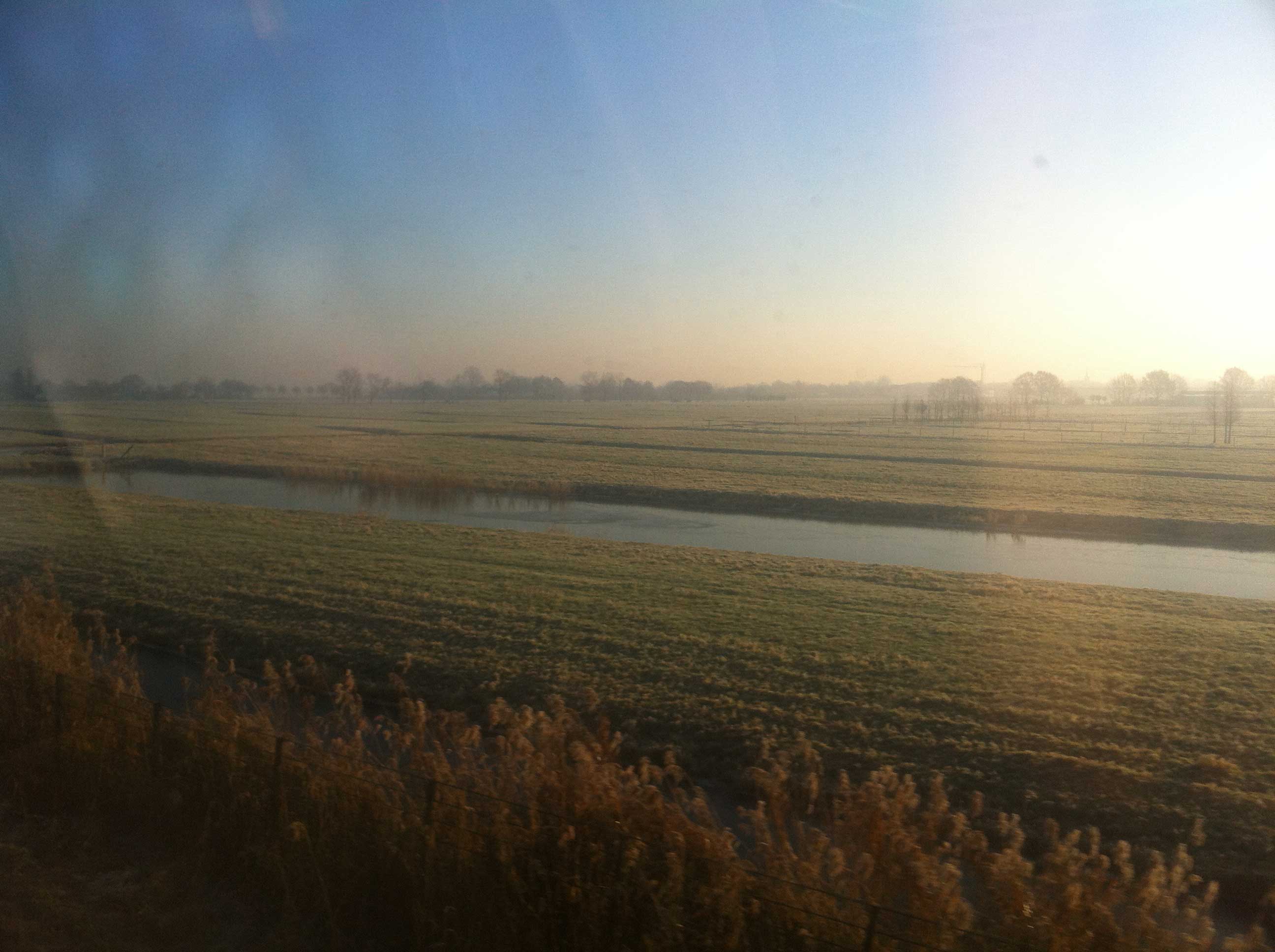 Tuesday 6 December 2016 i went to visit my mum. It was a cold day, a clear blue sky, little wind. The fields are almost white from the ice formed over the night. The sun standing low in the sky glares in my face.

My post for today was already thought of. The I Ching. But i did want to pick a good photo to go along with it.

And my thoughts? My dreams? Sex! Only when i’m on my own. Also, there are many other things i’m thinking about. But still. Sex! Kissing and touching and smiling and laughing and yearning. Not with any man in particular. Although i do have a short list, of course. And yet, this feels very much like a thing of me, something very personal. I still feel there is something inside me wanting to come out. Timing is the main issue. Extremely important.

And it is not time yet. Might be in the next couple of weeks. I hope. Not sure how long i can keep this up as it is.

Chên is movement; Li is flame, whose attribute is clarity. Clarity within, movement without-this produces greatness and abundance. The hexagram pictures a period of advanced civilization. However, the fact that development has reached a peak suggests that this extraordinary condition of abundance cannot be maintained permanently.

ABUNDANCE has success.
The king attains abundance.
Be not sad.
Be like the sun at midday.

It is not given to every mortal to bring about a time of outstanding greatness and abundance. Only a born ruler of men is able to do it, because his will is directed to what is great. Such a time of abundance is usually brief. Therefore a sage might well feel sad in view of the decline that must follow. But such sadness does not befit him. Only a man who is inwardly free of sorrow and care can lead in a time of abundance. He must be like the sun at midday, illuminating and gladdening everything under heaven.

Both thunder and lightning come:
The image of ABUNDANCE.
Thus the superior man decides lawsuits
And carries out punishments.

This hexagram has a certain connection with Shih Ho, BITING THROUGH (21), in which thunder and lightning similarly appear together, but in the reverse order. In BITING THROUGH, laws are laid down; here they are applied and enforced. Clarity [Li] within makes it possible to investigate the facts exactly, and shock [Chên] without ensures a strict and precise carrying out of punishments.

Six in the fifth place means:
Lines are coming,
Blessing and fame draw near.
Good fortune.

The ruler is modest and therefore open to the counsel of able men. Thus he is surrounded by men who suggest to him the lines of action. This brings blessing, fame, and good fortune to him and all the people.

The Chinese character for this hexagram means in its original sense an animal’s pelt, which is changed in the course of the year by molting. From this word is carried over to apply to the “moltings” in political life, the great revolutions connected with changes of governments.

The two trigrams making up the hexagram are the same two that appear in K’uei, OPPOSITION (38), that is, the two younger daughters, Li and Tui. But while there the elder of the two daughters is above, and what results is essentially only an opposition of tendencies, here the younger daughter is above. The influences are in actual conflict, and the forces combat each other like fire and water (lake), each trying to destroy the other. Hence the idea of revolution.

REVOLUTION. On your own day
You are believed.
Supreme success,
Furthering through perseverance.
Remorse disappears.

Political revolutions are extremely grave matters. They should be undertaken only under stress of direst necessity, when there is no other way out. Not everyone is called to this task, but only the man who has the confidence of the people, and even he only when the time is ripe. He must then proceed in the right way, so that he gladdens the people and, by enlightening them, prevents excesses. Furthermore, he must be quite free of selfish aims and must really relieve the need of the people. Only then does he have nothing to regret.

Times change, and with them their demands. Thus the seasons change in the course of the year. In the world cycle also there are spring and autumn in the life of peoples and nations, and these call for social transformations.

Fire in the lake: the image of REVOLUTION.
Thus the superior man
Sets the calendar in order
And makes the seasons clear.

Fire below and the lake above combat and destroy each other. So too in the course of the year a combat takes place between the forces of light and the forces of darkness, eventuating in the revolution of the seasons, and man is able to adjust himself in advance to the demands of the different times.