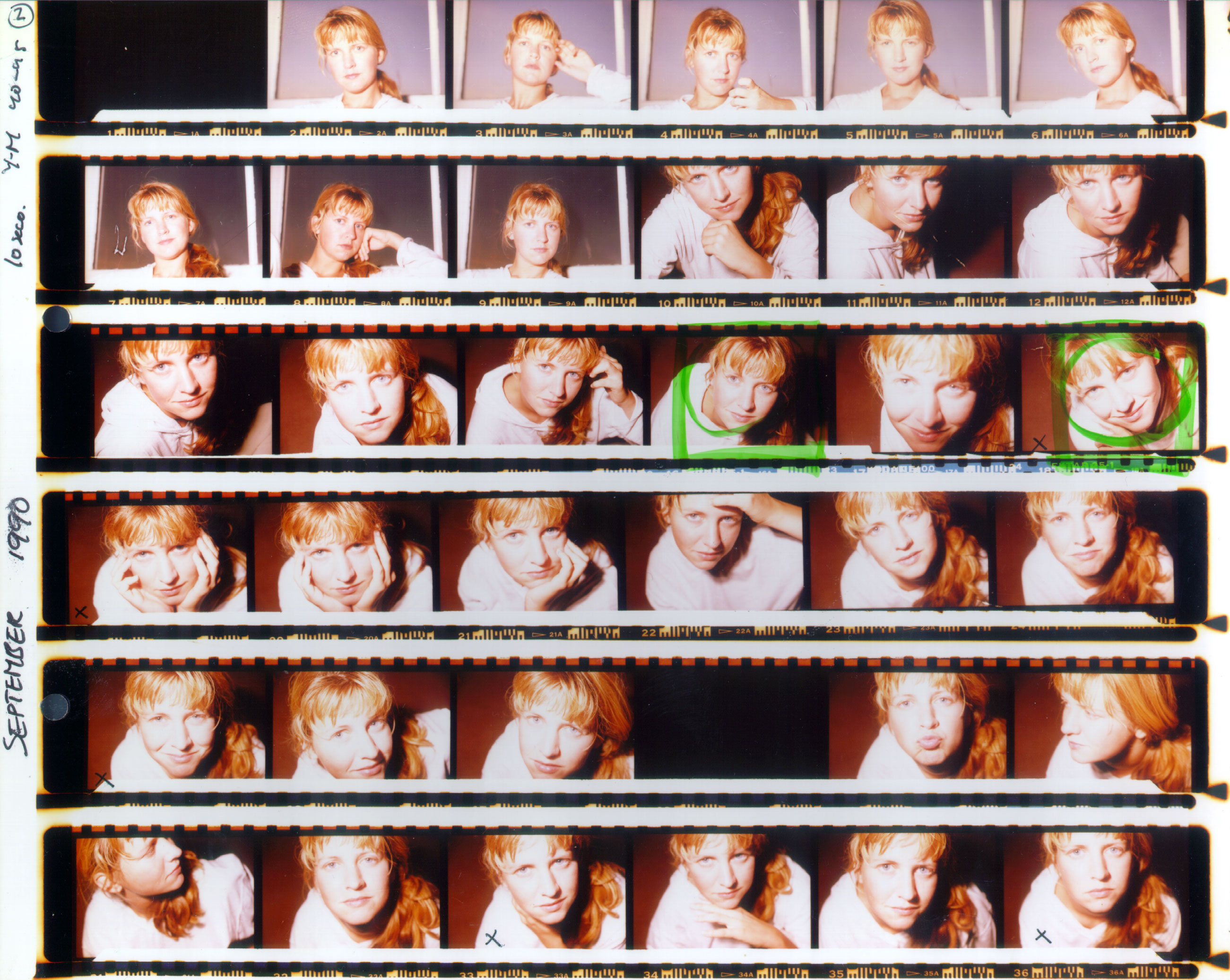 When i was at art school, making self portraits was a custom assignment. I had one in the first year. I made many many drawings then. None of them really looked like me. But i didn’t mind, that much anyway.

I did a year of painting and graphics. I got a zero for painting, so that was it. I wasn’t that troubled really. I remember when i got back at school i still had to sign up for another subject. I chose monumental and photography. Monumental was a part of free arts 3D, it had more to do with making installations and stuff.

So i got an assignment for photography to make a self portrait. And i kept on making self portraits. Till they finally transfered to monumental, where i started to make posters with text and pictures of me. That ended up in my final work for school.

I wasn’t sure at the time why i made this self portraits. I know i enjoyed looking at them, but i don’t remember only seeing a pretty girl. They were all of them very different. Some series were better than others. Some of them i didn’t like at all. But, they were all part of a learning process.

I still don’t know why i made so many photos of myself. But i like it that i have them. Today i made pictures of all of them. One i had scanned in, like 17 years ago. That is the the one at the top of this post. It is one of my favourites.

They did get to me today. I got fierce. Almost angry. I still am a bit. I realized i love this pictures. All of them. I love the series. I love all the different emotions on my face. In another post i will post some of the choices i made then, the ones i printed bigger. I see other choices now. I do think i see them in a different way now. With a bit more distance.

The first one is a very early one. Not really self portraits, but photos of me working in my house. The second one has photo's of a tv screen at the top (Kylie!) and some dancing photos of myself at the bottom.

The left one has one of my all time faves in them, the very first picture. I do love the way i look, so very serious. The one on the right has a couple of pictures of me sitting in my front room.

A few photos of me sitting, some dancing photos. The one on the right has photos of me posing. Also some pictures of friends.

On the left a straight forward series of head shots. The one on the right has a more diverse section, different viewpoints, different cuts. This could be the series i made for the self portrait assignment. Not sure though.

Both of these i made in the studio at school, with a small set of photography lights. I used 25 ASA negatives, which is very fine grained. The one on the left i don't like that much. The one on the left has a couple of nice photos, but still not my fave. It is hard to get the same feeling in a studio. I remember closing the end of, people were walking in and out of the dark rooms all the time. That was very distracting.

The one on the left, also made in the studio. Not a fave. The one on the right i think i made at home. Immediately you see the big difference. Some nice photos in there. Yes nice.

These two are my favourites. The one on the left was a studio session, with a dark background. The lighting works good. One of these pictures i used for my end project. The one on the right is made at home.The right most one with a green square around it is one of my faves.

Really, i didn't like any of these two. I did do something with coloured lighting, but it's just not right.

The ones on the left are ones i made at home. Most likely in the winter. The one on the right is made in the studio. Naah.

I do like the one on the left. I don't think i used any of these pictures though. And the one on the right i like too. Made at home. Some nice ones in here.

It is harder for me to make these kind of photos now. I am older now, have a bit more weight on me. It shows. But some photos i still like, like the one on the about page. I also don’t mind the photos i made for the beauty section. They do show my age yes, but that is only natural. Beauty is for the young ones. I do hope i’ve grown up since then, learned a bit more patience and consideration for other people. I always enjoyed being by myself, working, reading, listening to music. What my life is right now. Not sure what the future will bring. Let’s just see.