I have a room in the attic. It is a place to store stuff. Four apartments have a room there. When i went to London, fifteen years ago, to live there for a while, i put a lot of boxes with all my stuff there. It was stacked. After like 7 months, when i got back, i left a few boxes there. I might have taken a quick look to see what was in there, and thought that i didn’t need any of it.

Well, for like once a week i’ve been going upstairs and looked around. I took down a box full of books. The books i read when i was like 8 till 14 years old. Some of them i was even older.

The past week i read some of the books in there again. Which gave me a lot of pleasure!

Yes, i first read the Bouquet series books. This series is still available. It was like… 30 years that i last read these? The earliest one i have is number 62, which was published in the Netherlands in 1976. I was twelve then. I admit, the first books in these series were rather prudish. It was kissing mostly, feeling excitement yes, but no sex until you were married! Which usually happened at the end of the book. The later books were a bit more free in that aspect. Some had real proper sex, yay! I definitely had my favourites. There is one i still remember, which i sadly don’t have anymore. I also liked some writes better than others. I still got little red ears while reading a few of these.

I also have a lot of series. Billie Bradley i enjoyed. I didn’t know the series was published from 1920 through 1932. I also have Anne-Marie, a Dutch series. Katy and Zaza are Dutch too. Zaza was the best!

I also have some other Dutch series: Merel, Isabel and Annemieke. Not sure which one of these i liked best. I did like these books, but i don’t think they were my favourites. Some single pocket books, a couple from Leni Saris. I’m readng these again right now. They are different from the Bouquet series, which are mainly about a man – woman development which goes to the ultimate end. These Dutch books do have more of a story in them. The one i’m reading now, the Wingerdrank ( in English it’s well.. wingerd rank), is about a girl who is a journalist whose parent betrayed friends in the second World Was. There is love in there too, of course. It is a romance.

I do know i had the Enid Blyton series too. I now have only a few single books of these series. I think i have given away some of these books. Silly me! I remember the Famous Five. Sometimes i see this as a series on television and i still watch it when i come across it.

In the box there are also some other books, some of them i don’t remember at all. Not sure how i got them.

Well, that is almost it. The pictures are next. Still not sure what to do with them. My bookcases are quite full, but hopefully i can find a proper place for them. It’s good to have these books back in my little house!

Also, after making this post, i will make another post about my books. Lots of sci-fi, fantasy, literature, young adult, art and philosophy. Reading is not a huge part of my life, i do have periods i read lots, but also periods i don’t read anything. Ooh.. and magazines! Pfff.. so much more to come! 🙂 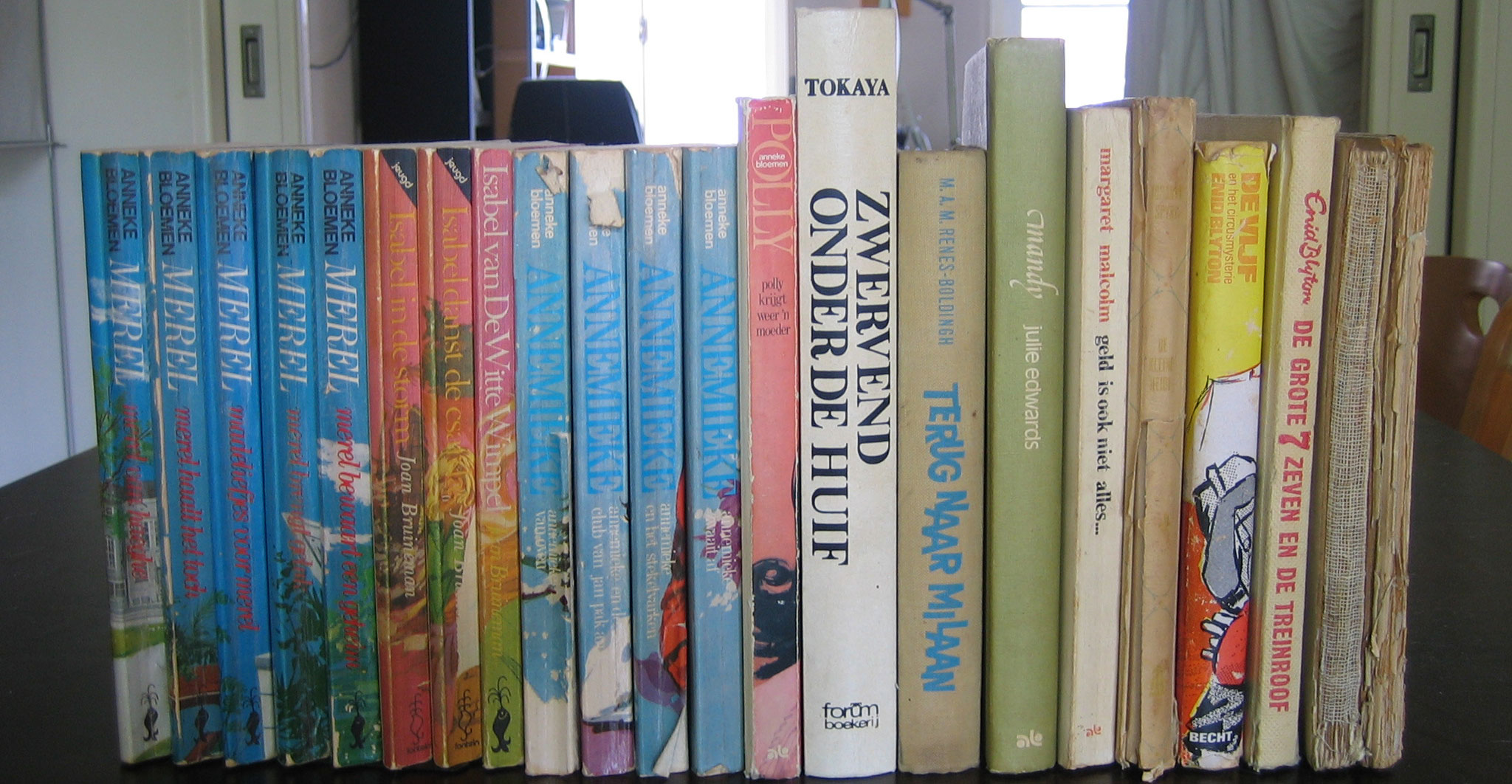 Merel, Isabel, Annemieke, Polly. Some other books. I do remember Mandy, i liked it. Enid Blyton of course too. And at the end, with no readable backs, i have two books with at the top drawings and the story below them. Those are remember too! One is called In de Soete Suikerbol.

Some other books, some of which i don't remember. Then some romance novels. Four from Leni Saris.

Katy was the creative person. She designed clothes. I have this recollection of her designing clothes. One was a grey and fur dress for Christmas, which against all expectations turned out really well. Zaza was more adventurous. I should read these again, i have forgotten most about them.

Billie Bradley went to a public school and had quite a few adventures. I should read these again too. Anne-Marie was quite adventurous. She even went to London and saved a couple of friends there.
Categorised in: Books, films and TV, My story
Leave your thoughts