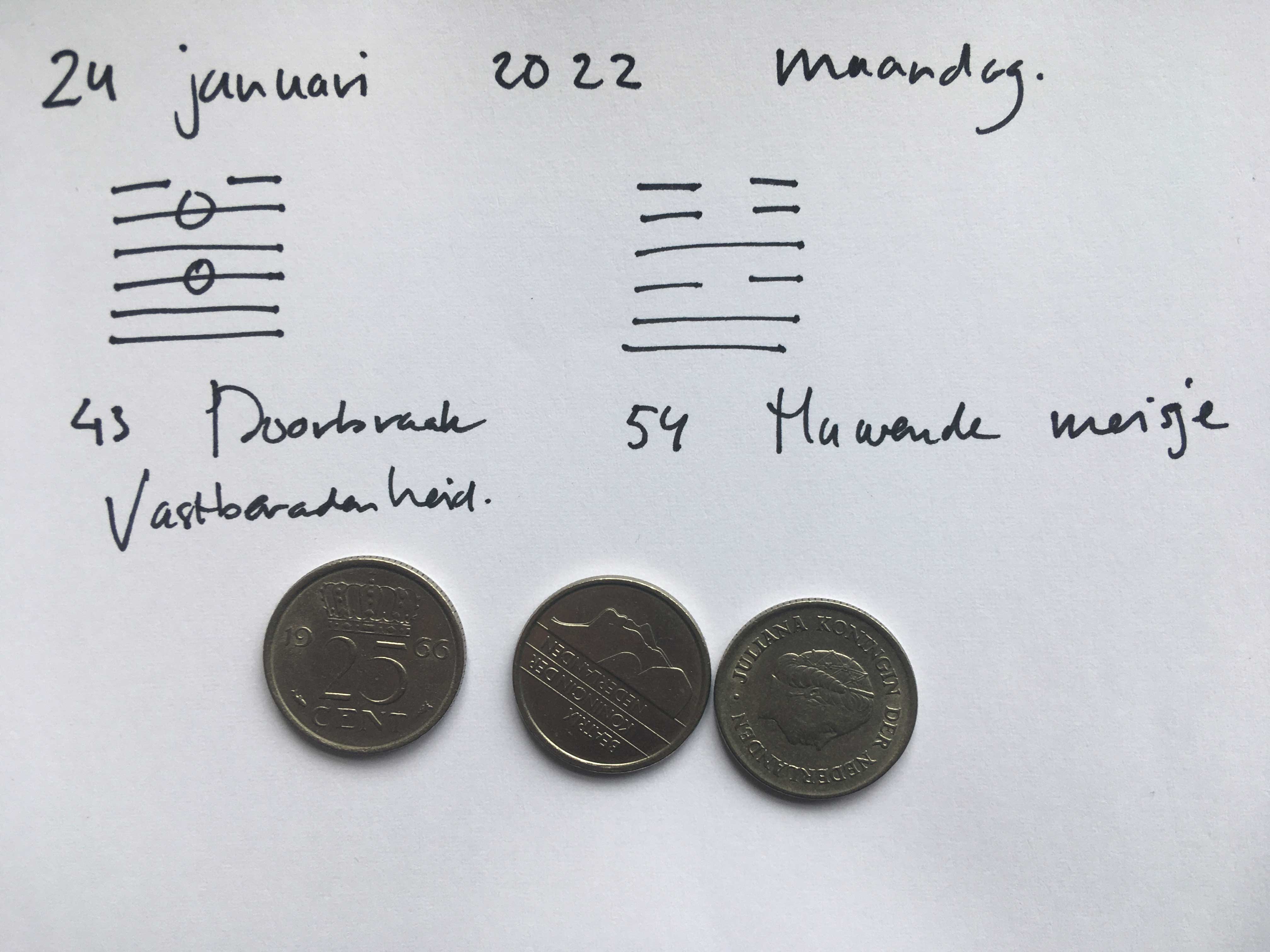 above TUI THE JOYOUS, LAKE
below CH’IEN THE CREATIVE, HEAVEN

This hexagram signifies on the one hand a break-through after a long accumulation of tension, as a swollen river breaks through its dikes, or in the manner of a cloudburst. On the other hand, applied to human conditions, it refers to the time when inferior people gradually begin to disappear. Their influence is on the wane; as a result of resolute action, a change in conditions occurs, a break-through. The hexagram is linked with the third month [April-May].

BREAK-THROUGH. One must resolutely make the matter known
At the court of the king.
It must be announced truthfully. Danger.
It is necessary to notify one’s own city.
It does not further to resort to arms.
It furthers one to undertake something.

Even if only one inferior man is occupying a ruling position in a city, he is able to oppress superior men. Even a single passion still lurking in the heart has power to obscure reason. Passion and reason cannot exist side by side-therefore fight without quarter is necessary if the good is to prevail.
In a resolute struggle of the good against evil, there are, however, definite rules that must not be disregarded, if it is to succeed. First, resolution must be based on a union of strength and friendliness. Second, a compromise with evil is not possible; evil must under all circumstances be openly discredited. Nor must our own passions and shortcomings be glossed over. Third, the struggle must not be carried on directly by force. If evil is branded, it thinks of weapons, and if we do it the favor of fighting against it blow for blow, we lose in the end because thus we ourselves get entangled in hatred and passion. Therefore it is important to begin at home, to be on guard in our own persons against the faults we have branded. In this way, finding no opponent, the sharp edges of the weapons of evil becomes dulled. For the same reasons we should not combat our own faults directly. As long as we wrestle with them, they continue victorious. Finally, the best way to fight evil is to make energetic progress in the good.

The lake has risen up to heaven:
The image of BREAK-THROUGH.
Thus the superior man
Dispenses riches downward
And refrains from resting on his virtue.

Nine in the third place means:
To be powerful in the cheekbones
Brings misfortune.
The superior man is firmly resolved.
He walks alone and is caught in the rain.
He is bespattered,
And people murmur against him.
No blame.

Here we have a man in an ambiguous situation. While all others are engaged in a resolute fight against all that is inferior, he alone has a certain relationship with an inferior man. If he were to show strength outwardly and turn against this man before the time is ripe, he would only endanger the entire situation, because the inferior man would too quickly have recourse to countermeasures. The task of the superior man becomes extremely difficult here. He must be firmly resolved within himself and, while maintaining association with the inferior man, avoid any participation in his evilness. He will of course be misjudged. It will be thought that he belong to the party of the inferior man. He will be lonely because no one will understand him. His relations with the inferior man will sully him in the eyes of the multitude, and they will turn against him, grumbling. But he can endure this lack of appreciation and makes no mistake, because he remains true to himself.

° Nine in the fifth place means:
In dealing with weeds,
Firm resolution is necessary.
Walking in the middle
Remains free of blame.

Weeds always grow back again and are difficult to exterminate. So too the struggle against an inferior man in a high position demands firm resolution. One has certain relations with him, hence there is danger that one may give up the struggle as hopeless. But this must not be. One must go on resolutely and not allow himself to be deflected from him course. Only in this way does one remain free of blame.

above CHêN THE AROUSING, THUNDER
below TUI THE JOYOUS, LAKE

Above we have Chên, the eldest son, and below, Tui, the youngest daughter. The man leads and the girl follows him in gladness. The picture is that of the entrance of the girl into her husband’s house. In all, there are four hexagrams depicting the relationship between husband and wife. Hsien, INFLUENCE, (31), describes the attraction that a young couple have for each other; Hêng, DURATION (32), portrays the permanent relationships of marriage; Chien, DEVELOPMENT (53), reflects the protracted, ceremonious procedures attending THE MARRYING MAIDEN, shows a young girl under the guidance of an older man who marries her.

THE MARRYING MAIDEN.
Undertakings bring misfortune.
Nothing that would further.

A girl who is taken into the family, but not as the chief wife, must behave with special caution and reserve. She must not take it upon herself to supplant the mistress of the house, for that would mean disorder and lead to untenable relationships.
The same is true of all voluntary relationships between human beings. While legally regulated relationships based on personal inclination depend in the long run entirely on tactful reserve.
Affection as the essential principle of relatedness is of the greatest importance in all relationships in the world. For the union of heaven and earth is the origin of the whole of nature. Among human beings likewise, spontaneous affection is the all-inclusive principle of union.

Thunder over the lake:
The image of THE MARRYING MAIDEN.
Thus the superior man
Understands the transitory
In the light of the eternity of the end.

Thunder stirs the water of the lake, which follows it in shimmering waves. This symbolizes the girl who follows the man of her choice. But every relationship between individuals bears within it the danger that wrong turns may be taken, leading to endless misunderstandings and disagreements. Therefore it is necessary constantly to remain mindful of the end. If we permit ourselves to drift along, we come together and are parted again as the day may determine. If on the other hand a man fixes his mind on an end that endures, he will succeed in avoiding the reefs that confront the closer relationships of people.