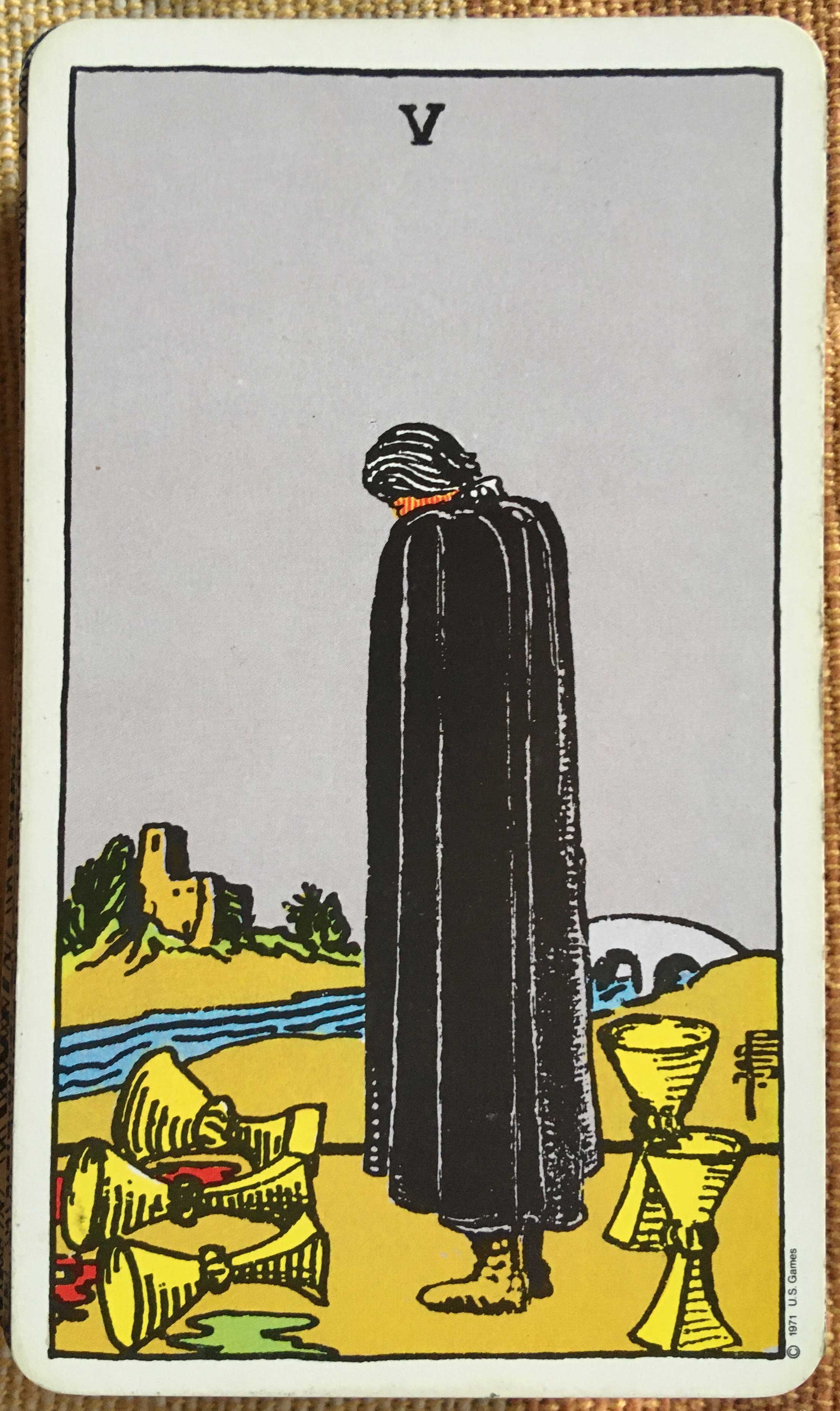 I don’t sleep very well. I know, i should not watch movies and television series on my iPad while i lie in bed. It is better to read. But it is hard to resist.

This is difficult. Last night it felt i fell asleep only half past five. I am not sure of this, it could be i was asleep earlier. I simply don’t know.

My card of today. A torrent of emotions has separated me from home. The past days i have thought about all my things, my furniture, my books, my records, my cd’s, my cooking stuff stacked in the storage facility. Feeling sad when i think abut this. Feeling like i have already lost this. Which i haven’t. But still.

It is difficult to find a good way to move forward in. Right now.

There are sure Tarot playing cards whose imagery without delay conjure up negative feelings, and the Five of Cups consists of such weight. This is a card which indicates loss as well as the painful demanding situations which stem from that unique loss.

The card depicts a figure that is wearing a black cloak. The man or woman hides his face in what seems to be despair. There are 5 cups at the ground, 3 of that have fallen whilst the opposite two remain status. The individual, however, appears to observe that there are two status cups as is simply too busy mourning over those which can be fallen. There is a effective river which flows between him and a house or a castle in the distance, indicating that a torrent of emotions have separated him from home.

Five of Cups meaning
The Five of Cups symbolizes disappointment, and the feelings that come when things go otherwise as you expected. You are feeling sad that a sure situation hasn’t clearly became out the manner you have was hoping it would. Instead of transferring in the direction of a more superb perspective, this card seems to mention which you are dwelling within the beyond, inducing emotions of self-pity and regret. The water which is simply spilled from the cups shows which you would possibly have overlooked an opportunity. It also shows that the trouble is often emotional and now not material or financial.

Instead of transferring toward a more fine perspective, this card seems to say which you are dwelling inside the past, inducing emotions of self-pity and regret.

The which means of the Five of Cups suggests that you can have certain issues letting go of things that are within the past. What is more, it also suggests that you are unwilling to analyze from mistakes which you have already committed. The card is regularly going to reflect a person who is so stuck up in his beyond that he is truly incapable of moving on. This way that he has a high danger of lacking out on what new joys that the future can bring.