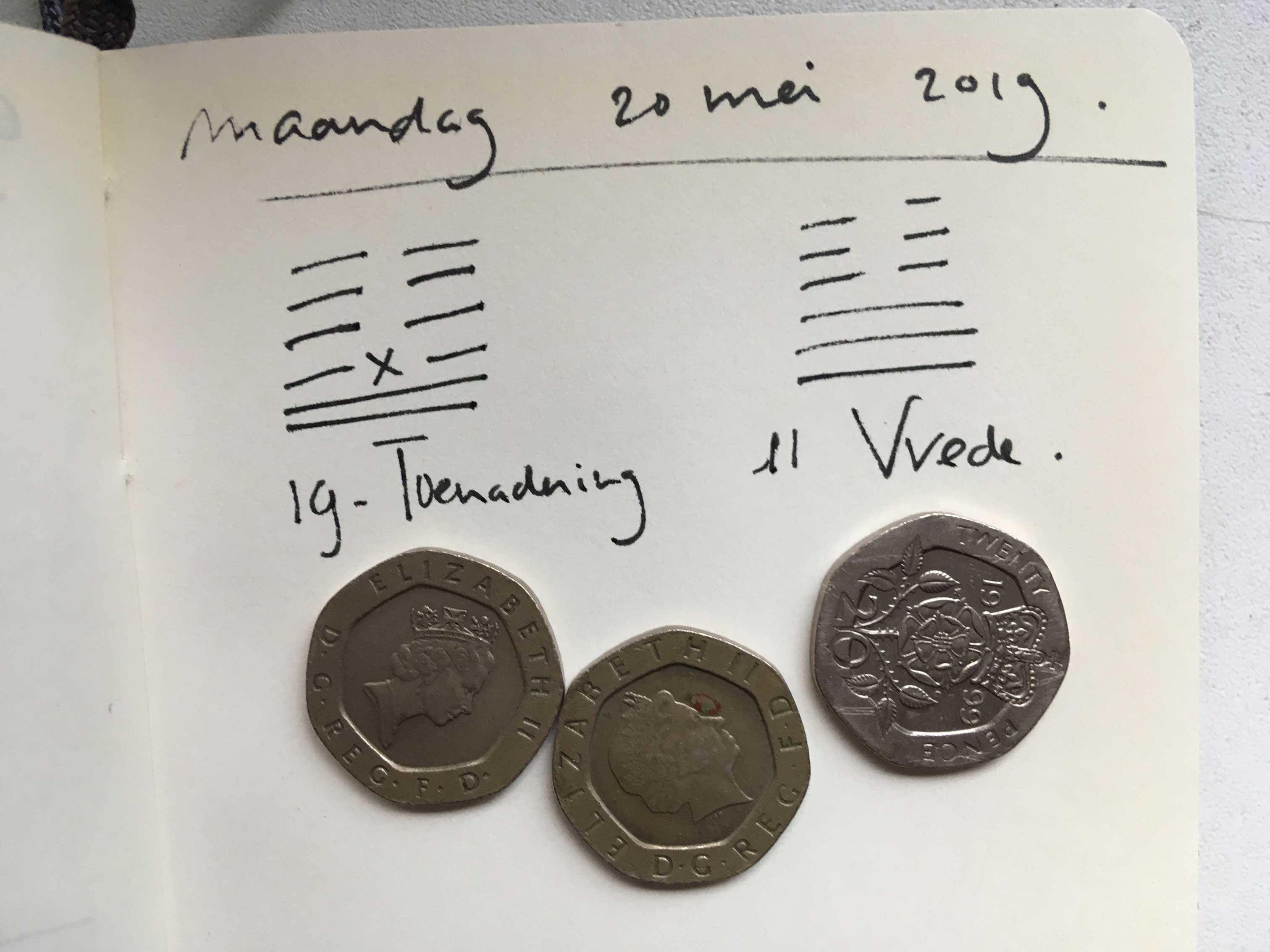 above K’UN THE RECEPTIVE, EARTH
below TUI THE JOYOUS, LAKE

The Chinese word lin has a range of meanings that is not exhausted by any single word of another language. The ancient explanations in the Book of Changes give as its first meaning, “becoming great.” What becomes great are the two strong lines growing into the hexagram from below; the light-giving power expands with them. The meaning is then further extended to include the concept of approach, especially the approach of what is lower. Finally the meaning includes the attitude of condescension of a man in high position toward the people, and in general the setting to work on affairs. This hexagram is linked with the twelfth month (January-February), when after the winter solstice, the light power begins to ascend again.

APPROACH has supreme success.
Perseverance furthers.
When the eighth month comes,
There will be misfortune.

The hexagram as a whole points to a time of joyous, hopeful progress. Spring is approaching. Joy and forbearance bring high and low nearer together. Success is certain. But we must work with determination and perseverance to make full use of the propitiousness of the time. And on thing more: spring does not last forever. In the eighth month the aspects are reversed. Then only two strong, light lines are left; these do not advance but are in retreat (see next hexagram). We must take heed of this change in good time. If we meet evil before it becomes reality-before it has even begun to stir-we can master it.

The earth above the lake:
The image of APPROACH.
Thus the superior man is inexhaustible
In his will to teach,
And without limits
In his tolerance and protection of the people.

The earth borders upon the lake from above. This symbolizes the approach and condescension of the man of higher position to those beneath him. The two parts of the image indicate what his attitude toward these people will be. Just as the lake is inexhaustible in depth, so the sage is inexhaustible in his readiness to teach mankind, and just as the earth is boundlessly wide, sustaining and caring for all creatures on it, so the sage sustains and cares for all people and excludes no part of humanity.

Six in the third place means:
Comfortable approach.
Nothing that would further.
If one is induced to grieve over it,
One becomes free of blame.

Things are going well for a man: he achieves power and influence. But in this lies the danger that he may relax, and confident of his position, allow the easygoing, careless mood to show itself in his dealings with other people. This would inevitably be harmful. But there is possibility of a change of mood. If he regrets his mistaken attitude and feels the responsibility of an influential position, he frees himself of faults.

above K’UN THE RECEPTIVE, EARTH
below CH’IEN THE CREATIVE, HEAVEN

The Receptive, which moves downward, stands above; the Creative, which moves upward, is below. Hence their influences meet and are in harmony, so that all living things bloom and prosper. This hexagram belongs to the first month (February-March), at which time the forces of nature prepare the new spring.

This hexagram denotes a time in nature when heaven seems to be on earth. Heaven has placed itself beneath the earth, and so their powers unite in deep harmony. Then peace and blessing descend upon all living things.
In the world of man it is a time of social harmony; those in high places show favor to the lowly, and the lowly and inferior is an end to all feuds.
In side, at the center, in the key position, is the light principle; the dark principle is outside. Thus the light has a powerful influence, while the dark is submissive. In this way each receives its due. When the good elements of society occupy a central position and are in control, the evil elements come under their influence and change for the better. When the spirit of heaven rules in man, his animal nature also comes under its influence and takes its appropriate place.
The individual lines enter the hexagram from below and leave it again at the top. Here the small, weak, and evil elements are about to take their departure, while the great, strong, and good elements are moving up. This brings good fortune and success.

Heaven and earth unite: the image of PEACE.
Thus the ruler
Divides and completes the course of heaven and earth,
And so aids the people.

Heaven and earth are in contact and combine their influences, producing a time of universal flowering and prosperity. This stream of energy must be regulated by the ruler of men. It is done by a process of division. Thus men divide the uniform flow of time into the seasons, according to the succession of natural phenomena, and mark off infinite space by the points of the compass. In this way nature in its overwhelming profusion of phenomena is bounded and controlled. One the other hand, nature must be furthered in her productiveness. This is done by adjusting the products to the right time and the right place, which increases the natural yield. This controlling and furthering activity of man in his relation to nature is the work on nature that rewards him.