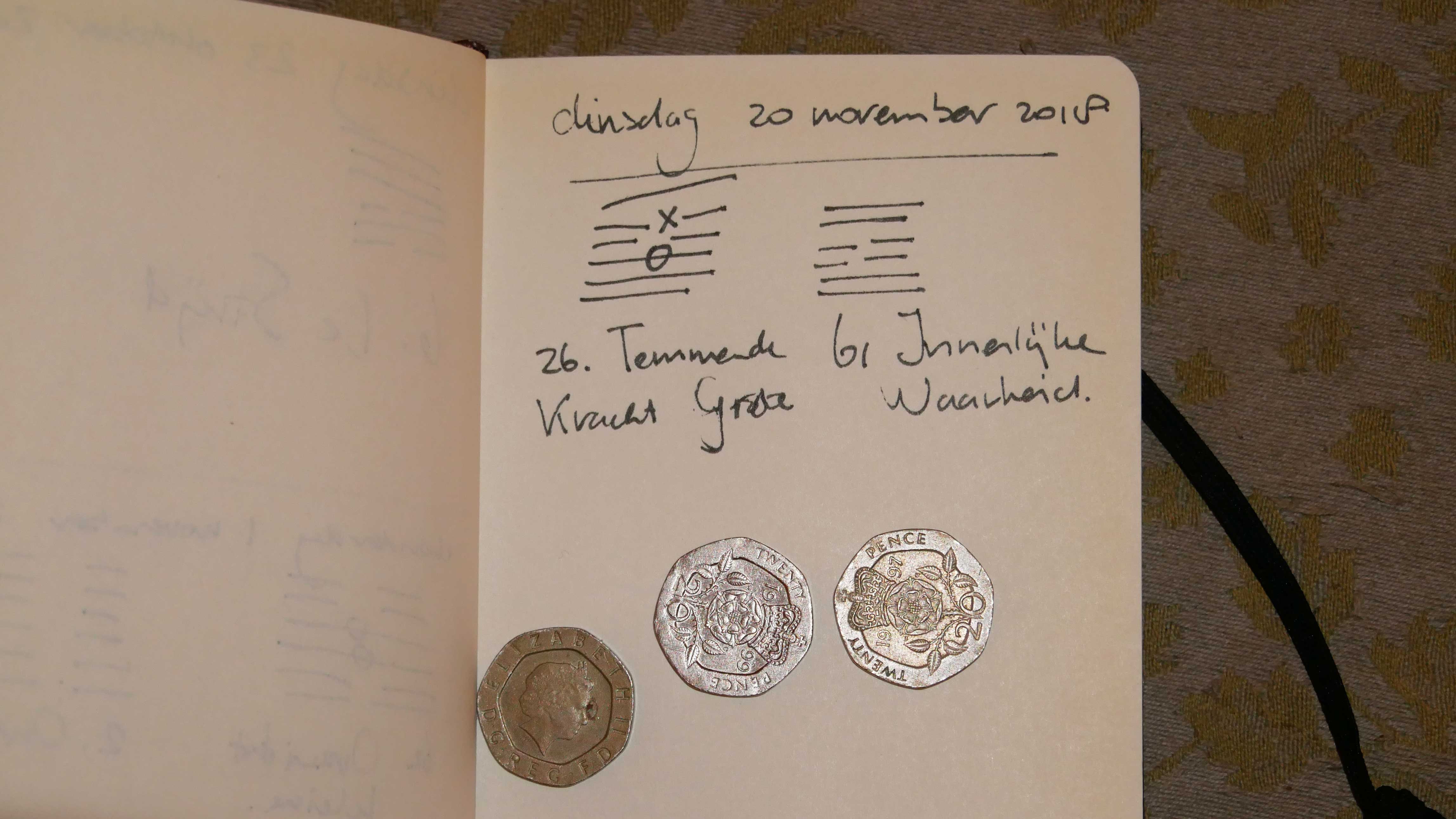 above KêN KEEPING STILL, MOUNTAIN
below CH’IEN THE CREATIVE, HEAVEN

THE TAMING POWER OF THE GREAT.
Perseverance furthers.
Not eating at home brings good fortune.
It furthers one to cross the great water.

To hold firmly to great creative powers and store them up, as set forth in this hexagram, there is need of a strong, clear-headed man who is honored by the ruler. The trigram Ch’ein points to strong creative power; Kên indicates firmness and truth. Both point to light and clarity and to the daily renewal of character. Only through such daily self-renewal can a man continue at the height of his powers. Force of habit helps to keep order in quiet times; but in periods when there is a great storing up of energy, everything depends on the power of the personality. However, since the worthy are honored, as in the case of the strong personality entrusted with leadership by the ruler, it is an advantage not to eat at home but rather to earn one’s bread by entering upon public office. Such a man is in harmony with heaven; therefore even great and difficult undertakings, such as crossing the great water, succeed.

Heaven within the mountain:
The image of THE TAMING POWER OF THE GREAT.
Thus the superior man acquaints himself with many sayings of antiquity
And many deeds of the past,
In order to strengthen his character thereby.

Heaven within the mountain points to hidden treasures. In the words and deeds of the past there lies hidden a treasure that men may use to strengthen and elevate their own characters. The way to study the past is not to confine oneself to mere knowledge of history but, through application of this knowledge, to give actuality to the past.

Nine in the third place means.
A good horse that follows others.
Awareness of danger,
With perseverance, furthers.
Practice chariot driving and armed defense daily.
It furthers one to have somewhere to go.

The way opens; the hindrance has been cleared away. A man is in contact with a strong will acting in the same direction as his own, and goes forward like one good horse following another. But danger still threatens, and he must remain aware of it, or he will be robbed of his firmness. Thus he must acquire skill on the one hand in what will take him forward, and on the other in what will protect him against unforeseen attacks. It is good in such a pass to have a goal toward which to strive.

° Six in the fifth place means:
The tusk of a gelded boar.
Good fortune.

Here the restraining of the impetuous forward drive is achieved in an indirect way. A boar’s tusk is in itself dangerous, but if the boar’s nature is altered, the tusk is no longer a menace. Thus also where men are concerned, wild force should not be combated directly; instead, its roots should be eradicated.

above SUN THE GENTLE, WIND
below TUI THE JOYOUS, LAKE

The wind blows over the lake and stirs the surface of the water. Thus visible effects of the invisible manifest themselves. The hexagram consists of firm lines above and below, while it is open in the center. This indicates a heart free of prejudices and therefore open to truth. On the other hand, each of the two trigrams has a firm line in the middle; this indicates the force of inner truth in the influences they present.
The attributes of the two trigrams are: above, gentleness, forbearance toward inferiors; below, joyousness in obeying superiors. Such conditions create the basis of a mutual confidence that makes achievements possible.
The character of fu (“truth”) is actually the picture of a bird’s foot over a fledgling. It suggests the idea of brooding. An egg is hollow. The light-giving power must work to quicken it from outside, but there must be a germ of life within, if life is to be awakened. Far-reaching speculations can be linked with these ideas.

Pigs and fishes are the least intelligent of all animals and therefore the most difficult to influence. The force of inner truth must grow great indeed before its influence can extend to such creatures. In dealing with persons as intractable and as difficult to influence as a pig or a fish, the whole secret of success depends on finding the right way of approach. One must first rid oneself of all prejudice and, so to speak, let the psyche of the other person act on one without restraint. Then one will establish contact with him, understand and gain power over him. When a door has thus been opened, the force of one’s personality will influence him. If in this way one finds no obstacles insurmountable, one can undertake even the most dangerous things, such as crossing the great water, and succeed.
But it is important to understand upon what the force inner truth depends. This force is not identical with simple intimacy or a secret bond. Close ties may exist also among thieves; it is true that such a bond acts as a force but,
since it is not invincible, it does not bring good fortune. All association on the basis of common interests holds only up to a certain point. Where the community of interest ceases, the holding together ceases also, and the closest friendship often changes into hate. Only when the bond is based on what is right, on steadfastness, will it remain so firm that it triumphs over everything.

Wind over lake: the image of INNER TRUTH.
Thus the superior man discusses criminal cases
In order to delay executions.

Wind stirs water by penetrating it. Thus the superior man, when obliged to judge the mistakes of men, tries to penetrate their minds with understanding, in order to gain a sympathetic appreciation of the circumstances. In ancient China, the entire administration of justice was guided by this principle. A deep understanding that knows how to pardon was considered the highest form of justice. This system was not without success, for its aim was to make so strong a moral impression that there was no reason to fear abuse of such mildness. For it sprang not from weakness but from a superior clarity.

I do not ask questions when i throw the coins. But there is a request for a general view on my life. And yes, i do value these quiet moments of thinking.